Wednesday 30 May 2001 – ‘Secret Valley’ and the Guanillos Valley

Our first stop of the day (S075) provided some marvellous Copiapoa grandiflora and C. longistaminea to point our cameras at. Some of the plants seemed to have a fungal or bacterial infection, causing black mucilage to seep out of the the stems.

Things got even better at the next stop (S076), when two more species of Copiapoa joined those seen at the previous stop. But the two ‘new boys’ were a lot more difficult to find. C laui was practically invisible, until I found one in flower. The small stems could easily be mistaken for old guanaco droppings. The second, tentatively identified as C. esmeraldana, was larger, but as 90% plus of the plant body was pulled into the ground and covered in dust and gravel, the yellow flowers popping out of the ground provided a good guide. There is some doubt about our ID of these plants, as seed from these plants and from C. grandiflora have germinated in the UK and are indistinguishable from each other. Did we get the ID wrong? Or did Ritter see two different generations of the same plant as different species?

Just to confuse matters a little more, Marlon was seen rushing about the place, chasing a single blow fly (or was it a small black bee) as it was flying from flower to flower, visiting all the four species in turn – so surely there should be some hybrids, or are some of the taxa we were looking at the hybrids? If so, which is which?

Too much excitement makes you hungry, so we went to the mouth of the Guanillos Valley for a spot of lunch on the beach (S077), among more clumps of C. longistaminea right opposite a guano covered island.

Two more stops (S078 and S079) and more C. longistaminea and C. grandiflora, but these looked a bit different – could there be intermediates between the two?

And so, back for another night under canvas at ‘Secret Valley’. 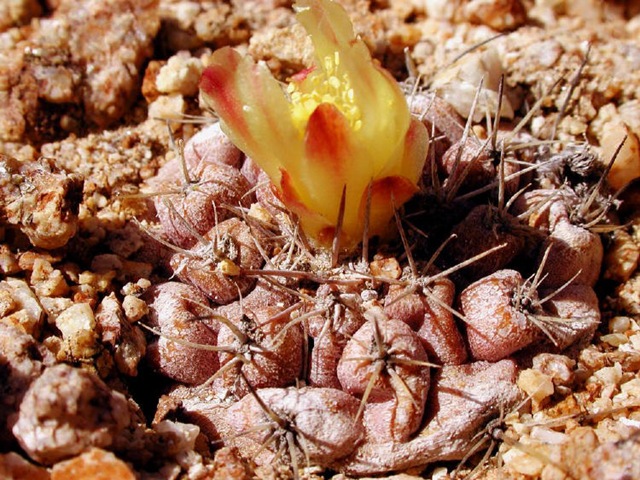 S076: We called this C. esmeraldana in 2001, but have learned since that
Ritter used this name for small plants growing high up the coastal hills over looking Esmeralda.
Plants growing in the Guanillos Valley have since been named Copiapoa angustiflora. WHY?