My original plan had been to explore the Izcugña Valley, the ‘next valley south of Botija’, where in 2001 the others saw Ritter’s Copiapoa varispinata while I was digging the car out of the sand at the mouth of the valley.

As we passed Paposo, I realised that I should have brought my laptop along – as it contained all the data (GPS information and detailed topographical maps) that I would need for a meaningful exploration. However, I had left them at the cabañas in Taltal.

I tried to find Izcugña from the sketchy details on a stop list print out and from my memories of 2001. One or two places looked like possible candidates, but did not have the stretch of sand where I had got stuck, so were dismissed. Never mind – return visits to previously visited locations had shown how these places can appear quite different on different occasions.

Rudolf had reported that during his visit in August 2004, Copiapoa solaris had been in bud and I was sure that the two most recently (2002) described Copiapoa species, (C. ahremephiana and C. decorticans), both from Botija, would be of great interest to Alain.

We had no trouble finding Botija (S284) and parked the car where on previous occasions we had set up the tents. The remains of our 2003 campfire were still there and, as I closed my eyes, I could almost hear the voices of the 2001 and 2003 Copiapoathoners laughing and joking as the bottles of wine came out in preparation for the night. But this time it would just  be a day trip, as there were still more things to see around Taltal.

I had lost plants of C. ahremephiana in cultivation through rot, with the stem tissue bright orange as I threw the dying plants out.  Time had come to examine a few plants in habitat – bright orange stem tissue! Were all these plants infected by a virus? Similar tests on C. decorticans and C. atacamensis showed ‘healthy and normal’ stem tissue, but C. solaris also had this orange stem tissue. Did this species also suffer from the same disease? Or is it merely a common feature of healthy plants, with potential for use as a diagnostic feature? Or do all Copiapoa display this feature after extraordinary long periods of draught? Most of the C. solaris that Rudolf reported in bud 2 months earlier must have aborted, as there was no sign of buds, recent flowering or fruits. Anne found some plants in flower, with the flowers a similar reddish colour to the C. desertorum at Cifuncho!. None of the signs of recent rains seemed to have extended this far north – why?

We made four stops (S285, S286, S287 and S288) on the way home, all before reaching Paposo. As a result I have more images of Copiapoa haseltoniana at different locations to check out. 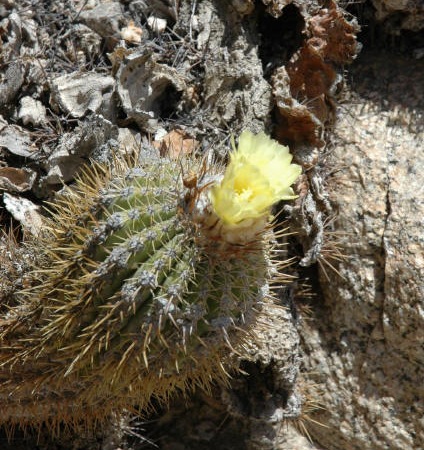 S284: Survival – This healthy and flowering stem of C. decorticans is
all that is left of a large clump that has sacrificed its other stems.