It was becoming a familiar rather than surprising sight, waking up in Copiapó’s Hotel Miramonte, with the Ruta 5 bridge over the Rio Copiapó shrouded  in fog, just as in 2003.  However, by the time that we had finished breakfast, it had already started to lift and continued to lift as we drove up the Rio Copiapó valley to Paipote. My aim was to familiarise myself with another of the northern Chilean river valleys, having made similar inland sojourns up the Rio Limari / Rio Grande valley (2003), Rio Elqui (2001 and 2003) and Rio Huasco (2001). Like the other valleys, the water flow is now controlled by a dam (at Embalsa Lautaro) that stores water in a man-made lake.

We did not go that far, having planned to turn west at Puente Potrero Seco. Like the other valleys, the stored water is used to good effect in irrigating the valley and surrounding lower hill sides with extensive vineyards all around. Ironic that the activities that threatens the survival of cacti in the wild – change of land use; here agriculture – had clearly lead to increased prosperity of the local human population and had provided us with numerous pleasant evenings back in Europe as we enjoyed our bottles of Chilean wine at our Copiapoathon reunions. In addition, this valley has extensive mining activity, with mines determining the quality of the roads and where in the valley they lead. This tends to be in the green centre of the valley, rather than close to the hill sides with the opportunity to explore some of the tracks leading further up hill.

We followed a sign west to Ruta 5, believing that the confusing intersection we had reached was at Potrero Seco. It was not, and so we followed an excellent road that runs from Nantoco over the hills to Ruta 5. New vineyards were in the process of being established, in various stages of progress from freshly ploughed fields to newly planted areas and others where the first crop seemed to be harvested.

We stopped soon after we reached the top of the hills (S301) at 1,041 m. altitude according to my GPS. We found the omni-present Cumulopuntia sphaerica, Miqueliopuntia miqueli and statuesque, lichen covered, Eulychnia and looked to the west on the cloud cover that seemed to lie on top of the Pan Americana as it ran between Copiapó and Vallenar. It seems that the valley between these hills and the coastal hills further west is an excellent fog catcher, so that it is no coincidence that the area is most frequently featured in articles and photographs about el Desierto Florido – The Flowering Desert.

Soon we were on Ruta 5, but fortunately the fog was just a low cloud base over our heads that soon burned off as the sun 28 degrees South packs quite a punch in October. There was another surprise, as instead of having to play ‘spot-the-turn-off’ for the track to Carrizal Bajo, it was properly sign posted and the track had turned into an excellent tarmac road. Having read many of Ritter’s travelogues, it is hard to imagine that he’d get his car stuck in sand here on a regular basis. Again – road building does destroy habitats, but it also opens up so much more country to be explored. Let’s hope that this in turn does not lead to ultimate total habitat destruction. We stopped at km 48.5 from Ruta 5 (S302) and found Copiapoa echinata and Eulychnia, some with the buds bare, apart from small soft scales, characteristic of E. acida and some with almost white woolly buds, associated with E. breviflora / iquiquensis. Some of the Eulychnia were in flower.

S303 was last year’s S198 – irresistible as the first Copiapoa dealbata appeared alongside the track. These are among the most impressive Copiapoa, forming huge clumps of white-waxed heads. The variability in spination, stem shape and colour is amazing. We also found an interesting red lily, Leontochir ovallei (Garra de léon – the Lion’s claw) among the desert flowers that increased in number as we came closer to the coast. Apparently this is among the most sought after of Chilean lilies, referred to as ‘the holy grail’ on a US bulb hobby list.

We showed Alain Carrizal Bajo – again with signs of growth and development all around, with a sign indicating that an Airport (Aerodromo Gran Cañon) is planned for the outskirts of town, at this time, covered in wild flowers (S304).The bright yellow flowers of Cruckshanksia pumila, a small shrub, prompted another stop, too close to the last one to take a GPS reading – it was difficult to progress as every ten metres some new plants seemed to jump into the scenery.

S305, near Caleta Sarco del Norte, was another 2003 stop, but this time, with non-cactus flora dominating the scenery, it was difficult to spot the large clumps of C. dealbata that stood out so prominently last year.

S306 was prompted by a rocky outcrop with C. echinoides, on a sandy plain. Alain and my built-in Euphorbia-spotting allergy concurred –  in the sand we found the cousin of Euphorbia copiapina – the straight leaved E. thinophila, again in great numbers and by no means a rarity – when it is visible.

How many times does an event need to be repeated to become ‘a tradition’? If three is enough, then we had reached the traditional spot for the Copiapoathon Group Photo – this time S307 (S200 in 2003 and S030 in 2001) – the sloping side of a water run-off covered in large mounds of C. dealbata, with small C. echinata also dotted around. Last year, we took a look on the other side of the slope and found many small Eriosyce (Thelocephala) sp., probably a form of E. napina. They were quite easy to find this time, as most had very recent flower remains (no ripe seed) and were plumped up from recent moisture. Some were still in flower.  All good things come to an end (for now) and so it was time to move on to Huasco.

What a day! We had to pinch ourselves during that evening’s slide show in Hostal San Fernando, to check that we were not just dreaming of the huge range of plants and scenery that we had seen all in the space of 12 hours. How could we improve on this tomorrow? 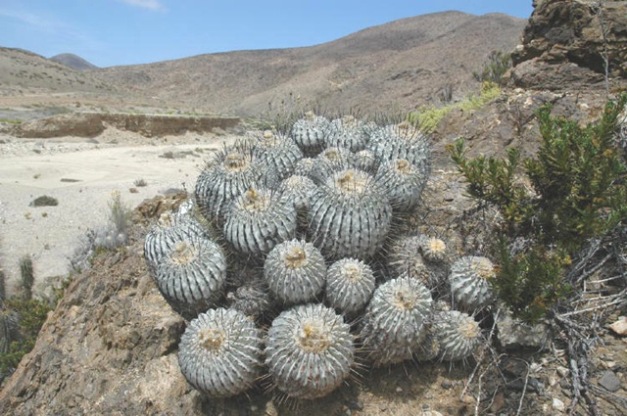