Yesterday, Johanus had suggested showing us some plant sights around the town culminating at  the Valley of Desolation. Johanus and Egmont met us at around 8 a.m.in front of the Obesa Lodge and less that 30 minutes later we were at the first stop of the day, S2762, offering some nice views over the town and obviously a place popular with local people to enjoy nature so close to their home. Some of the plants photographed here were new to us on this trip and yet a few of them were very familiar to me. Last year, back in the UK, a lady contacted the Portsmouth branch of the BCSS to ask for a good home for some large succulent plants as she had to move to smaller accommodation. I now have two ‘bonsai trees’ of Crassula ovata, the Money Tree, that live on my patio from May to October and squat in my living room during the winter months where today, early January, one of them is covered in flowers. It has grown so large that I’m not sure if we’ll be able to get it back to the patio in Spring. Every time these plants are moved, they ‘self-prune’, dropping short branches on the soil of the pot and, if not removed, these root down and start growing on their own. Here it was in nature.I tried to find an angle to take images that made this plant look good here, but failed. There was too much competition and the plant that won the coveted ‘plant of the Stop’ image is 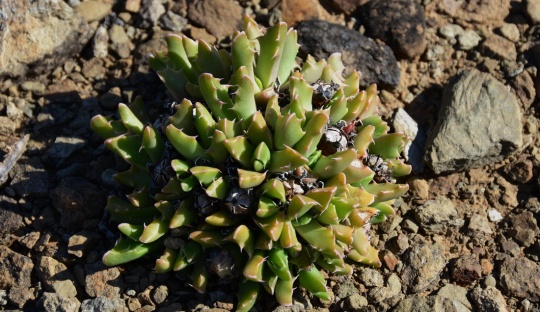 During my ‘first phase’ in the hobby – I started at the age of 6 in the Netherlands! – Faucaria were among my favourite plants, partly due to names such as F. tigrina, Tiger’s Teeth, that appeals to youngsters; I was also collecting plastic dinosaurs at the time! Seeing a Faucaria here in nature touched a chord.

We passed through the entrance of the Camdeboo National Park and at the next stop, S2763, found this plant waiting for us. 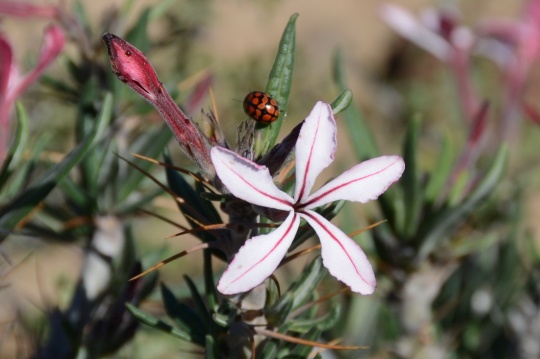 Much more recently, September 2011 to be precise, at ELK I spotted three large caudexes in a pot. As Angie says: ‘The plant spoke to me’ and as a result came home and spends the winter in my living room next to the Money Tree. In the summer I’m not sure what to do with it – afraid to over water it, it sat on the patio and enjoyed a few showers, but as we had the wettest summer on record, it also spent lots of time indoors. It dropped its leaves but they came back in Spring, but it had not flowered. Seeing these plants in nature and hearing of the conditions it endures there (light frost, tropical storms, long periods of drought and high temperatures), plus seeing that the caudexes were hidden below the soil in all but two cases, where erosion had washed the top soil away. The Ladybird was a nice added extra – Nature’s pest control!

As a plant trip, all the images taken have a great bias to plant photography. Here however, the sole purpose of this stop was to try to get images of the vervet monkeys that were enjoying the sunshine in the trees by the side of the road. Zoom lenses are great! 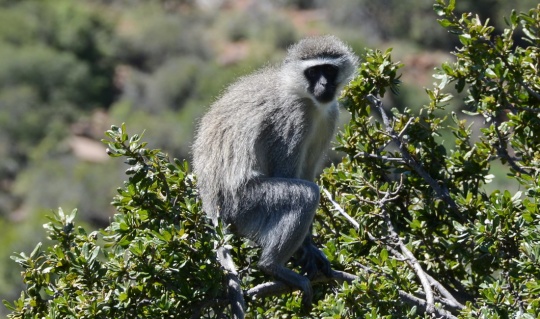 We reached the end of this morning’s excursion, S2765, the Valley of Desolation. A dramatic name and the foot path from the car park took us to some dramatic views and another animal begged to be in the picture 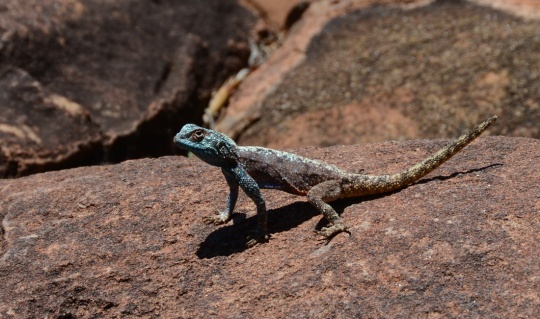 We said our goodbyes and thank yous to Johanus and Egmont, they had been very generous with their time showing us places that in the limited time here we would never have seen. Thank you very much!

From here we would make our own way down to town and from there to our next destination, Somerset East. Johanus had given us some tips for stops on the way down the hill, as well as what to avoid: the ostriches were in their breeding season and the male birds could be quite aggressive and territorial this time of year. One kick of their powerful legs could land you in hospital or worse!

Past the ostriches but still along the Nqweba Dam Reservoir we felt safe enough for another brief stomp around (our term for a random plant stop) (S2766) and I could not resist another picture of: 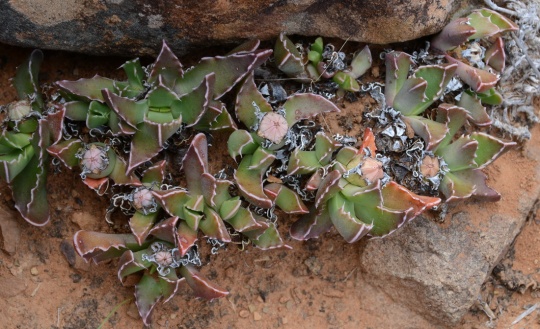 A bit farther along, we stopped at a lay by on the R63 (S2767) to check where we were and where we were going. Just as we were about to pull away, we spotted plants on the rocks along the opposite side of the road, opposite the Nqweba Dam Reservoir. This was the star of the show 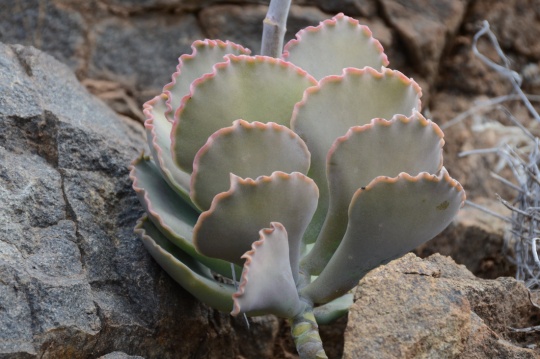 It was only some 125 km to Somerset East, so there was time for another leg stretch, roughly at the half way point (S2768). Again this random stop produced an interesting set of plant images, including: 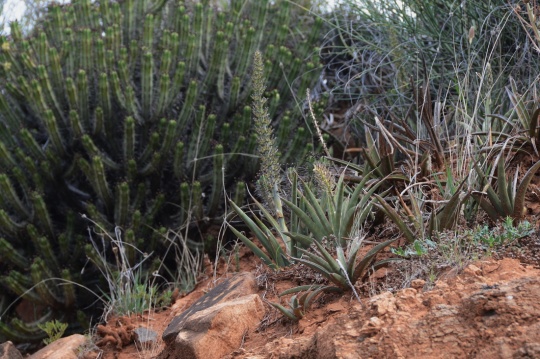 Sansevieria are a permanent childhood memory, on Grandma’s windowsill in Breda in the Netherlands. In many Dutch households at the time, the ‘Mother-in-Law’s tongues’ would be a substitute for net curtains to stop passers-by looking in while the occupants could watch the world go by. Here, a different species, grew in nature.

We made one more brief stop for a Euphorbia sp. spotted along the side of the road. That makes it sounds as though spotting succulent plants from the car was a rare event. Not at all, but they became the excuse for stops when spotting them coincided with the need for a toilet stop or, for Eunice, a nicotine stop. How are the New Year’s resolutions going, Eunice? 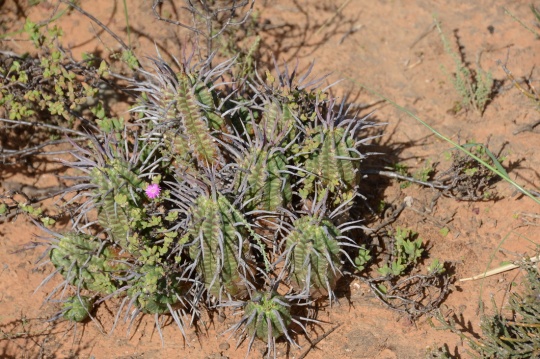 We were reminded that everything is closed in South Africa on a Sunday afternoon as we drove into Somerset East, including the main Hotel and one of the B&Bs that we tried. Without too much trouble we found accommodation in the very nice and comfortable Angler and Antelope Guesthouse, with welcoming hosts and even met up with a couple on a motorbike touring holiday – we recognised seeing each other at the Camdeboo National Park.

Tomorrow we would reach the eastern most point of this trip, another indicator, as we turned back west, that we were on the way back home – all good things come to an end. We still have more than two weeks to go!