Taxi for Klaassen! It was 9:00 and Bart & Marijke had come to pick me up for today’s drive, while Brendan & Lucy had come for JYC. There was no need for three cars and 4x4s were best today, although our Nissan Xtrail would have easily coped. Still, very nice to have a break from driving!

First on today’s agenda was a stop (S2912) for a huge area covered in Copiapoa cinerea ssp column-alba off the Taltal-Cifuncho coast road. The plants here were the size of seals and the felt disc at the apex had grown since I visited C. column-alba in the region with Angie in October – life was returning to cactus country. 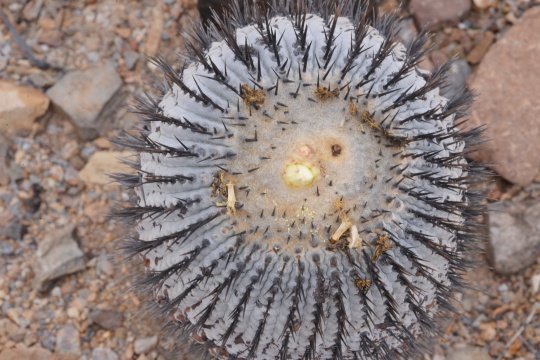 The second stop (S2913) was at the usual C. desertorum stop, perhaps a little closer to Taltal than usual. One or two plants were in flower – red as usual although there were some plants with a peculiar reddish yellowish in colour; not ‘bright red’ as say, in red flowered Rebutia, but ‘reddish’, as is the expected yellow pigment was missing, allowing the usual red pigment found on the outside of the tepals . Brendan claims to have seen ‘normal Copiapoa-yellow’ flowers on clumps here and nearby, but in January. I have only ever recorded reddish flowers on desertorum ,so that it could be that there are two cryptic taxa with different flower colours that flower at different times. Also here were lots of small seedlings, the size of a pound coin upwards. I had not recorded such rejuvenation of the population closer to Cifucho.

I’ve never been convinced with this species status as a subspecies of C. taltalensis – where is the evidence? 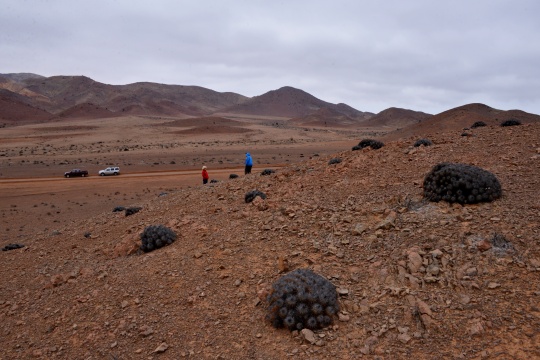 Next we paid our respects to Alan Craig, our friend who died in 2001 and who asked for his ashes to be taken to Chile and left with his favourite plants. Brendan accompanied Alan’s widow on his last journey and we’ve visited the little monument that marks the spot on each of our visits to Chile. All was well at the monument, with local algae fisherman apparently still looking after it in Brendan’s absence. This time they left a lighter and some pictures of saints near the cross. In the past we had shared cigarettes with the local fisherman, as a thank you for looking after Alan. Perhaps the lighter was in hope that it would bring them more ciggies? (S2914)

In the past I had always admired a large C. longistaminea near the small mount but this had been uprooted with heads broken off. Animals? or human vandals? We replanted the plant in the hope that it might survive. Brendan showed us the near by site where he had camped in 2010. He had dug a base into which the tent would fit and when they left he had written his initials, BJB, in the sand. Today those initials were still clear and could easily be read, 3 years later!

The sun had come out and the scene on the Ocean shore with the guano covered island in the background was very peaceful. See you next time, Alan!

Next we set off to a section of beach below Las Lomitas that we had christened ‘Puma Bay’ after an earlier visit when we had camped here. Two favourite plants, one a clump with both C. longistaminea and C. grandiflora growing as one and another where Marlon Machado and I had found a large crested head at the base of the plant when we had first seen it in 2001 were still there. By 2004 I was sad to find that the crested head had been chopped off. The large plant that remains still bears the scars. Both plants looked to be struggling – too dry for too long? 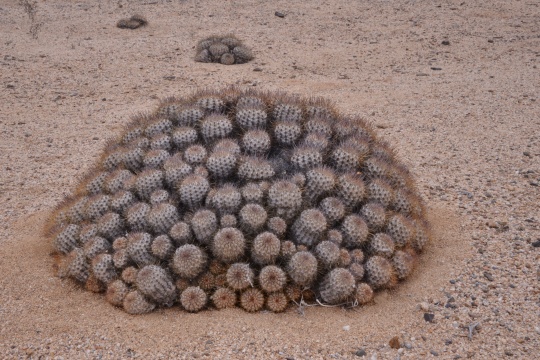 We had another ‘Neil Armstrong/Buzz Aldrin moment’ when a fisherman walked up to us out of nowhere for a chat. Unlike us, he was fluent in Spanish. He was very pleased that we were so keen on Chilean plants and explained that he had a vegetable garden at home. He was quite insistent that we’d come and see it – quite interesting what could be done at Esmeralda under a plastic cover: tomatoes, melons, ornamental flowers etc. (S2916).

He also explained that his job consisted of walking out onto the rocks with a machete, chop off the algae and then drag them ashore. He and his neighbours had each been awarded a small claim to harvest and periodically a car would come and collect the 25 kg bales of seaweed after it had been dried. He also told us that it was possible to drive in a car (4×4 we assume) from Pan de Azucar village, along the base of the coastal hills to Esmeralda and beyond to Tigrillo. Worth remembering for a future trip!

He also told horror stories of bodies being washed ashore with their legs cut off – men wearing shirts with brass buttons and bullet holes in the back of their heads – reminders from the days of the Pinochette regime! A recent find had been outlined using dark stones at S2915:

Next we headed back through the Guanillos (Huanillos?) Valley to a spot where we should find C. laui. After a bit of searching, Lucy was the first to find the first of thousands tiny, match-stick sized heads. 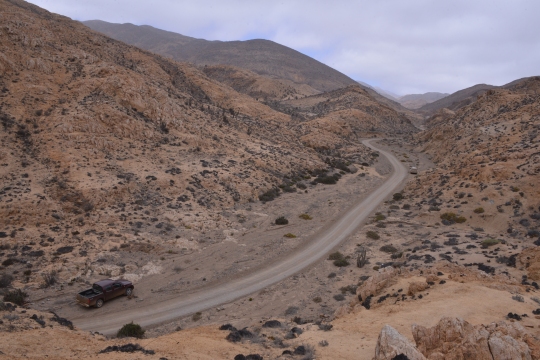 Next we headed to Ritter’s TL for C. columna-alba. (S2918) We took a quick look at the northern entrance to the Pan de Azucar that in 2010 had been blocked to prevent illegal entry to the park. The barriers had been torn down and a local van drove in, seemingly on his way to Chanaral or Pan de Azucar village. Good news!

And so first Brendan & I, then JYC & Brendan re-enacted Ritter’s photo at the TL. Together with Rudolf Schulz’s images at this spot for his 2006 book and again during our visit in 2007, we should have a good picture of how much / little things change here over the years.

Bart made one more stop, for what he believes to be Ritter’s C. horniloensis – currently passing under the name C. taltalensis, but while we found the plants, it turned out that we were somewhere different to where we thought we were – but still found the plants!

I was glad that I was not driving as I fell asleep on the backseat for the journey home – another great day!!