This is another day where, back home, months later, I find that I never produced a Diary page for this day, so I’m making this up from memory (yeah, right!) with maps and 193 images from six stops to help me.

S3088 was simply for images around our hotel and around town. I love taking shots of quirky signs etc, so loved the ‘No smoking’ sign above the BBQ. Health & Safety is alive and well and has reached Mexico. Angie’s son Adrian is a wheelchair user and will love the picture of the wheelchair ramp up to the swimming pool area. It seems that later they decided to add another two steps to reach the pool, but forgot to extend the ramp:

Ramp
In the Dutch language, the word ‘ramp’ means ‘disaster’. Here too, if you are a wheelchair user coming down from the pool!

Our northern-most Thelocactus on this trip was to be Thelocactus lausseri. We had been warned that this plant is only found on a private property north of Cuatro Cienagas and that the owners were not friendly when it came to allowing cactus tourists on their land to photograph the plants. We had coordinated for our SatNav for the gate to the property – you never know if there were people to have a chat with to ask what was possible. Things had changed: there was another gate, some 8 km before the gate that we knew about with a number of formidable padlocks. Sometimes fences are built to stop animals from escaping into the road, sometimes they are aimed at keeping people out, as was clearly the case here. We did not feel like pushing our luck. ( S3089)

Instead we headed back south along Mex 30 to S3090 where on previous visits we discovered the ultimate ‘cactus tourism spot using modern technology’. We had coordinates for a population of Ariocarpus kotschoubeyanus and entered these into SatNav. It warned us that there was a turn coming up that we should take. It turned out to be a dirt track back into the desert. After a short while, it told us to turn again, this time to follow a straight line on the screen to a flag marking the spot to go to. We stopped ‘on the flag’, in a large flat, featureless area. Not a plant in sight. Until we opened the doors of the car and each found one or two Arios growing right below us, where we were going to put our feet. There were hundreds or was it thousands of plants all around us. Purist Cactus Explorers will frown at this. ‘Proper Explorers’ like to strap on a ruck sack, load up with water bottles and camera gear and start walking into the desert heat. They have to suffer for their pictures. I don’t mind doing that, if absolutely necessary, but getting there in the comfort of an air conditioned car has its benefits too. You should try it! 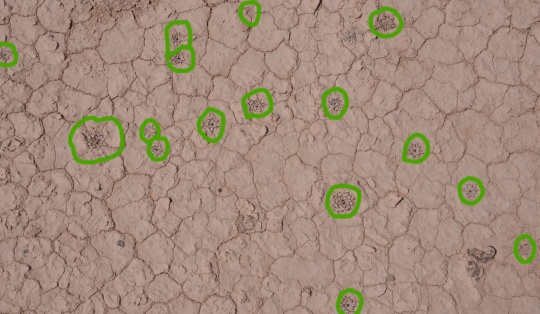 Ariocarpus kotschoubeyanus – S3090
The density of this population continued for kilometers

We drove across the dried up silt of what in wetter days would be a lake, to the foot of the hills (S3091) to establish the extend of the Ario populations. They reached to a few hundred meters of the foot of low hills. They were then replaced by some very desiccated Coryphantha poselgeriana,  Echinocereus enneacantus and Agave sp.

Back on Mex 30 and right along the side of the road we stopped at another area from 2010 and 2011 visits (S3092) for a Fouquieria. Plants in this genus are very familiar in the North American deserts; F. splendens with its tall (3-4 meters!) thin stems, known as the ‘coachman’s whip’, has long spikes of red flowers that are pollinated by hummingbirds. After flowering, the stems briefly become covered in leaves. We have come across areas where white or pink flowered forms dominate. In Baja F. columnaris, the Boojum tree dominates the scenery for many hundreds of kilometers. Here, a small patch seems to be the only place to see F. shrevei, a low shrub with white flowers on individual stalks appearing close to the stem, pollinated by bees. Quite rare I understand. Apparently not the stuff that cactus collectors go for. We were lucky: the plants were in flower and the bees were visiting. 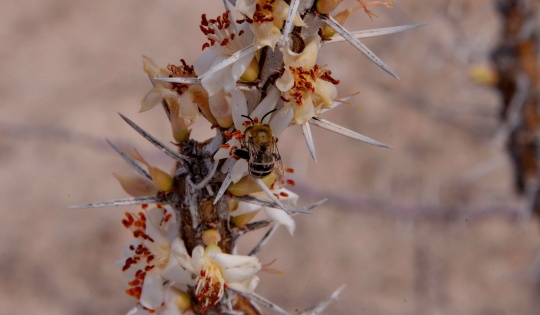 ‘Fouquieria shrevei is a plant species native to the States of Coahuila and Durango, Mexico. It can be found in the Cuatro Ciénegas basin in Coahuila, approximately 50 km west of Monclova, at an elevation of about 740 m (2467 feet). There are several natural springs in the region, allowing an estimated 150 species of endemic plants and animals to survive in this desert oasis. The species has also been reported from other sites in the same state plus one locale in the neighboring State of Durango.

Fouquieria shrevei is a shrub up to 3 m (10 feet) tall, branching repeatedly near the base but hardly at all above. Leaves are ovate to oblanceolate, up to 3 cm (1.2 inches) long and 2.5 cm (1.0 inches) wide, with scarious (thin, dry and brown) margins. Flowers white, born in short racemes in the axils of the leaves. The board leaves plus the axillary racemes of white flowers make this a distinctive and unusual member of the genus.’

As we had entered MEX 30 from the previous Ario stop, Ian thought that he had spotted a bright coloured cactus flower. It was still early as we headed back towards the hotel; plenty of time for us to take a look (S3093). We photographed Agave lechuquilla, Astrophytum capricorne, Coryphantha sp, Echinocactus horizonthalonius, Echinocereus longisetus, Epithelantha micromeris, Euphorbia antisyphalitica, Grusonia bradtiana, Mammillaria pottsii, Mammillaria sp. Opuntia sp., Sclerocactus (Ancistrocactus) uncinatus and Thelocactus bicolor.