I spent a good part of the day winding Ian up about the fact that in a week’s time he’ll have spent his first day back at work. But the real point is that there are still six glorious days to see cacti in habitat and a lot more images waiting to be snapped to remind us of the marvels that we’ve seen.

We started the day just 5 km or so from the Premier Hotel, Rio Verde, where on 3 March 2011 Eunice and I had searched and found Turbinicarpus lophophorioides and Coryphantha maiz-tablensis. Then the plants were very shrivelled up and difficult to tell apart. Nothing had changed much, including our inability to distinguish the two taxa – may be we were only seeing the one and did not tell which one it was! We resolved that if it was pulled into the ground, it was T. lophophoroides, else it was C. maiz-tablensis. Areoles & spine clusters were almost identical, all quite different from plants in my collection. But just as back home, it seemed that these plants were short-lived.

Next we went off to another 2011 stop. This time I was confident that we’d park the car and just walk straight up to the first electricity pylon where we’d turn left to find Ariocarpus retusus ssp scapharostrioides plus lots of other cacti. All the land marks ticked all the boxes – but there was just one aspect missing – the cacti! May be it was at the second pylon, or may be the third? By the time Ian had made it to the fourth pylon there was an enthusiastic wave from him – he had found them. By then, Cliff had given up in the heat and had returned to the car but this time with me as the key holder. As usual Cliff likes to do his own exploring and although I had shouted as loud as I could each time that we were moving on to the next pylon, he claimed not to have heard. He was not best pleased when we returned, but as all who have travelled with him will confirm, he is usually the last to return to the car, so I have had to wait many times. 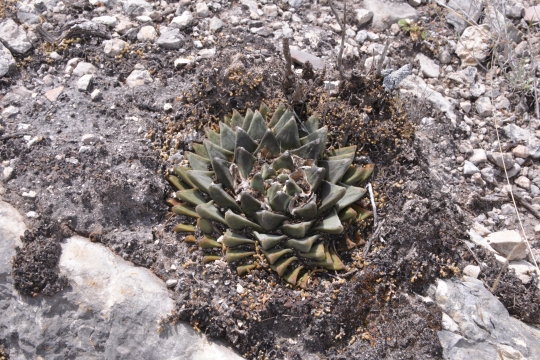 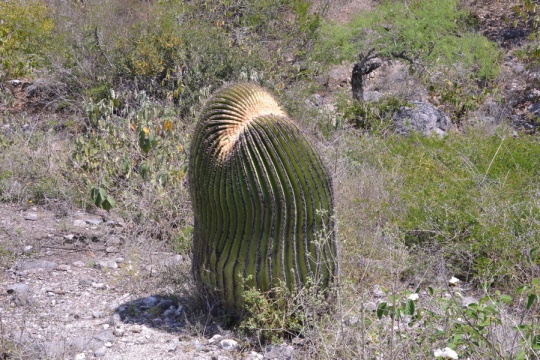 Angie has her ‘Smiler’, I now have Echinocactus platyacanthus ‘Belly Laugh’ – S3123

Our next stop (S3124) was for Lophophora viridescens, just a quick 30 minute stop, near San Francisco. It took me just five minutes to gain the opinion that the conditions were wrong to find Lophos here, too dry in the open places, lots of cacti among the shrubbery and ceroids, but too much annual vegetation to spot tiny plants beneath them. The others confirmed my opinion 30 minutes later. Plants found include Coryphantha maiz-tablensis, Cylindropuntia leptocaulis, Echinocereus enneacanthus, Mammillaria sp. Myrtillocactus geometrizans, Stenocereus (Rittercereus) pruinosus and Tillandsia recurvata.

The next stop (S3125) was for the giant 3 meter tall Platy – Echinocactus platyacanthus that Eunice and I had first seen in 2011. Then, she had been on one side of the hill while me and the giant were on the other. I made three attempts to balance my camera on another platy and use the timer to take a picture of me and the giant – I failed. This time Ian obliged. As I walked up to the giant I was reminded of the opening number on Eric Clapton’s 50th Anniversary Concert at the Royal Albert Hall, where Angie had taken me for my 60th birthday: ‘Hello, old friend!’  In my alternative nomenclature system for individual cacti seen in habitat, this becomes PK#4 – Lanky (syn. Tally and Giant). 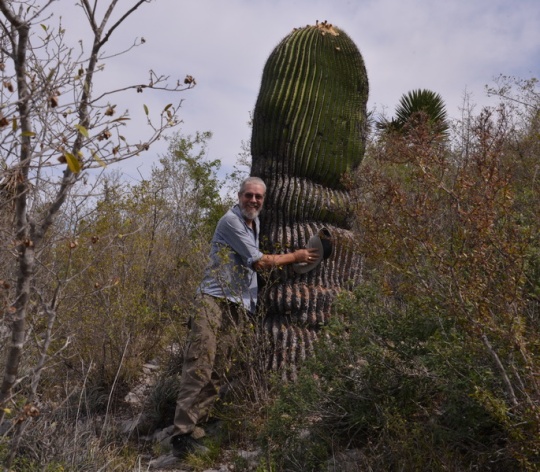 As in 2011, I probably took more images of Astrophytum myriostigma in flower here than on the rest of the trip put together. There was also a small plant that I first thought was Coryphantha maiz-tablensis, but as they got larger towards the top of the hill it was clearly a Thelocactus, presenting us with the problem of which one – T. hexaedrophorus was a candidate (but not recorded from this area), which would add another tick in the Thelo-list – but is it? And if so, which form? I’ll have to check what I called it in 2011, if indeed I recorded seeing it (I did not – or may be as a Coryphantha sp?). I’ve settled on T. tulensis based on information from literature. 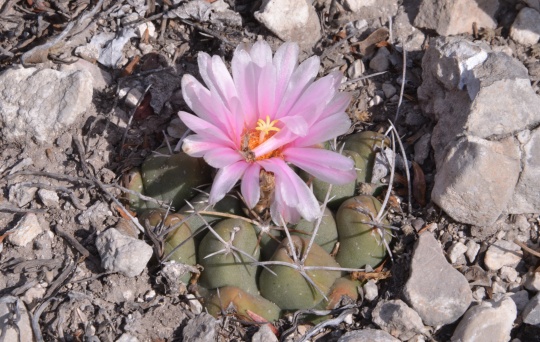 We had passed all these stops yesterday and had bounced all this way again just to see these great plants. Then the plan had been to take the highway to Rio Verde and while I was having a snooze the plan got changed so that we ended up bouncing along a variable quality track. Then, we stopped in a hamlet where Ian bought two family size bottles of Cola and the elderly lady pointed out that there was a deposit on these plastic bottles. At the time we thought: ‘ yeah, what ever!’ Today he was able to return the empties.