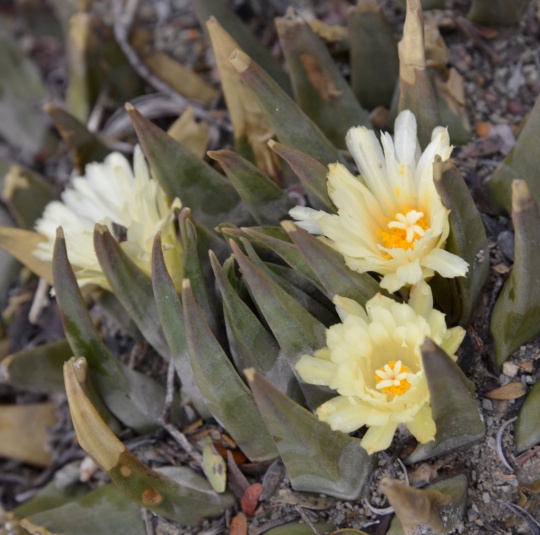 The rain had stopped during the night so our car party went for breakfast ‘next door’ while Ian and Cliff got over the previous night’s rum headache.

First stop (S3161) was at the second site where we had seen Obregonia denegrii in March, some distance past the village of San Antonio. As expected, the plants again looked pumped up after the recent rain, high humidity and high temperatures. The water had caused quite a bit of erosion here, with some plants growing isolated on small ‘islands’ during a hard rain. The Obregonia looked in great shape with many huge mature plants balanced by lots of young seedlings. Then there were the Arios, A. trigonus here, but still no flowers or buds on the first plants we saw. It was not until we climbed the low hill where we had seen plenty of them in March that Sarda (again) became to spotter of plants in flower.

Also here, some magnificent Astrophytyum myriostigma, with one or two still in flower. When added to our March pictures, we have of course much too many images than ‘needed’, but can you ever have too many pictures of nice cacti?

A quick visit at the Pemex in Jaumave to milk the ATM machine and I was solvent again. And on to the track to EL Cielo where we had been surprised by some really nice plants before. We headed straight for the farthest away stop from March, with a brief stop where the track crossed a river, so that I could take some pictures of huge groups of butterflies. The Monarch butterfly’s migration route is supposed to go by here (S3162). And so on to the farthest away spot, but 2km before we got there, the track, very muddy and wet in places, proved too much for our ‘townie cars’, so we parked and enjoyed a 2 km march (S3163). It was not too hot, but boy, was it humid! Cliff struggled as a result. Again the cycads looked magnificent and although the vegetation was much more dense, I still managed to find the huge clump of Mammillaria klissingiana that the audience at my presentations had enjoyed.

One more stop on the way back (S3164) where in March we had found Neolloydia ‘grandiflora’, then in full flower, now just looking pretty without flowers. Theleocactus conothelos was also here, but partially hidden in the tall grass, and a very nice small Coryphantha.

Got home safely and just about to get ready for dinner.