In exactly one month time I should be on my way to Heathrow to escape British Winter before the clocks switch to Winter Time. This time, my escape is to the fourth largest island in the world, Madagascar, with the airport some 18 degrees south of the Equator.

‘But there are no cacti in Madagascar’, I hear you say. Well, there are, but none are endemic, with the usual culprits finding the conditions to their liking, thus continueing the non-endemic theme started by Cylindropuntia tunicata in Chile in 2015. In the absence of natural enemies and encouraged to spread by the now declining goat population was causing a real pest here. I expect Cylindropuntia to be again amongst the most successful invaders, but also expect Harrisia and, from ‘the other succulents’, Agave, to be among the aliens. All were brought here by humans, but found the conditions so favourable that they escaped into nature and started to compete with the natural flora.

The main image of Madagascar in my mind is the cover image of Werner Rauh’s first book on the Flora of Madagascar, of the giant pachycaul trees, Adansonia grandieri, standing guard along the Avenue of the Baobabs. It is a ‘must see’ place to visit. 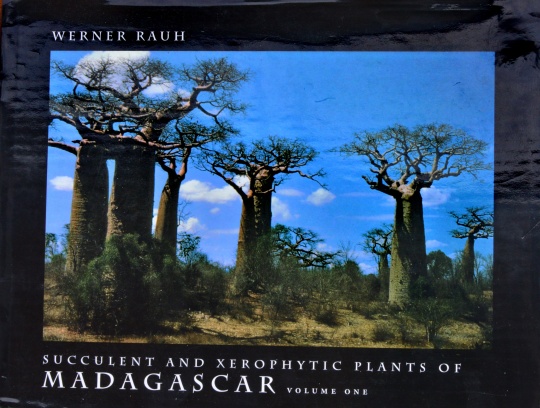 … the giant pachycaul trees, Adansonia grandieri, standing guard along the Avenue of the Baobabs.

But the Baobabs are not the only ‘fat stemmed trees’ on the island. There are members of the Family Apocynaceae (Adenium and Pachypodium) and Euphorbiaceae to name but a few, that all possess these fat stems. I have come across them on my travels, in Australia, South Africa, Namibia and in Mexico, to the point that I thought that I could do a presentation on the subject, but not before having seen the Madagascan giants.

‘But you know nothing abouty these plants!’ I hear you say. Again, correct, but my library and the internet provide just about all the information I need and I have actually grown (and killed) a number of Pachycauls since my visit to South Africa and Namibia in 2012 and we are being guided by French botanist, Christophe Quenel, recommended to us by BCSS CactusWorld editor Al Laius, who has travelled with him before. Just as knowledgeable (?) as I am, is my UK fellow traveller John Childs, who is also looking forward to pointing his camera at the Pachycauls, while we both also hope that lemurs and chamelions will cross our lenses.

As usual, I plan to write up my reports of what we see on a daily basis for publication in the Cactus Trip Diaries Blog. It is likely that internet facilities to send out these epistles on a daily basis may be difficult to find, so that I expect them to be released in batches when ever wifi is available. And I don’t expect these to be ‘broadband’, just a thin fragile wire, so that images may have to wait until we arrive back in the UK in mid November. The images and movie clips will be sorted and arranged to become a digital presentation and I have already accepted many invitations from BCSS Branches to show What I saw Last Winter in 2017.

You can subscribe to this Blog, to receive new postings by email, as soon as they are published.

I hope you’ll join us next month!