It was a bit cozy in our tent as John and I laid stuffed like sardines in ourt respective sleeping bags in our tent. Fortunately, my near legendary ability to sleep anytime, any place, anywhere was still working and I was off as soon as I closed my eyes. When I made my night time bladder run out, John had gone, including his sleeping bag. That left more space in the tent when I got back from my mission.

View from my tent as I woke up

John had left the tent soon after I had dropped off and had taken his sleeping bag to the other side of the rock that you can see above.

The scenery looked great by the morning light. Christophe, Jean, John and I went back on the track for another 5 km to see some other plants, leaving Nadia to clean up ‘at home’:

Is E. itremensis just a white flowered form of E. quartziticola or a good species for various reasons other than flower colour? We saw much more yellow flowers in total during our stay on the Massif then these white flowered plants. I joked and asked Christophe to show me a red flowered plant. He took us to another location but there were no red flowered plants on show. Different flowering time? I joked and asked him to show me a form with purple flowers with orange spots but he told me that he was still working on that one in Photoshop!

Next Jean took us to a site for Aloe erythrophylla grows. On the internet it is said to be rare in cultivation, probably as much for the remoteness of its restricted habitat – it is endemic to the Itremo Massif – as anything else. Difficult to photograph, as the visible plants were high on the rocks with the sun at the wrong angle. 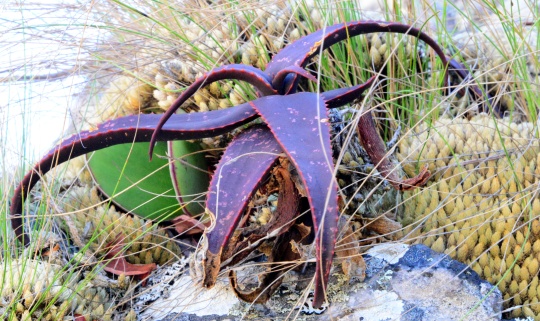 At the next stop there were two Aloe, both basking and fully exposed to the sun at an altitude of c 2,000 m, still growing on quartz. It would be interesting to know the soil pH, which for Uebelmannia populations in Brazil, also on quartz, was around pH 3.5, equivalent to strong Hydrochloric acid. Must take a field pH kit on future trips. 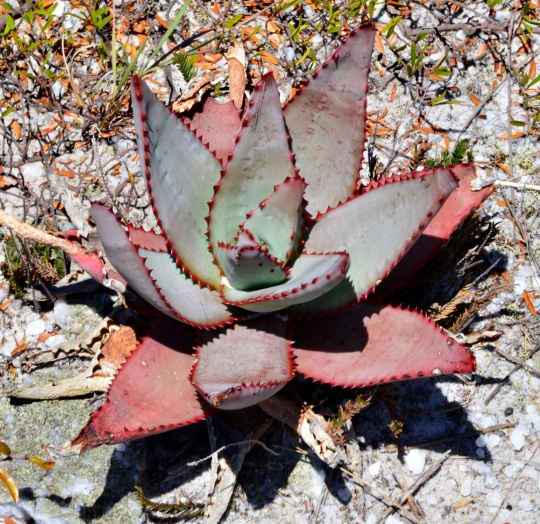 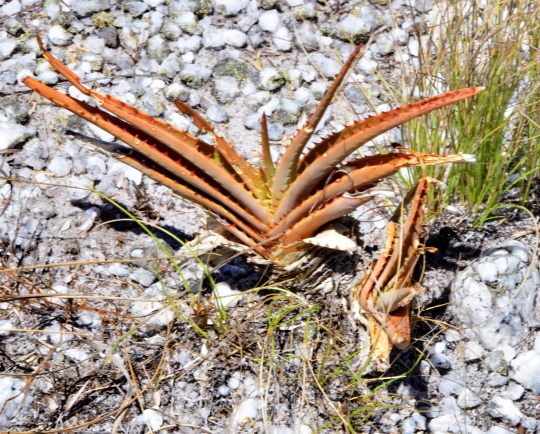 This second Aloe differs ‘from the bunch’ seen so far by its distichous leaf arrangement that persists even on large mature plants. We did not see flowers, but the internet reports that the inflorescence is unbranched with the flowers clustered at the tip.

Today was certainly Aloe Day! At the next stop we were shown Aloe macroclada. These were large plants with a large (finished) inflorescence full of seeds. In the picture below, John acts to provide scale to show the size of this Aloe. Too large perhaps for a UK hobby glass house but should be a hit in gardens in California. The leaves have been shown to have the same healing properties as Aloe vera that could become an important local industry.

We reached the administrative office in Itremo village. Again, a crowd of curious locals crowded round. We decided to give the warm Cola a miss but did find the project representative who collected our due for our visit – well worth it!

Soon after the village we stopped at the site where we did not have enough time to take pictures yesterday for another Aloe, Aloe capitata var.cipolinicola.

This species is again better suited to a Californian garden than a UK hobby greenhouse!

We reached the worst stretch of the track and again it was a case of ‘everybody out’ (except driver Christophe) who carefully followed Nadia’s and Jean’s instructions while John and I photographed and videoed the car’s very slow progress, often with just three wheels in touch with the track. We still had the bridges to go! 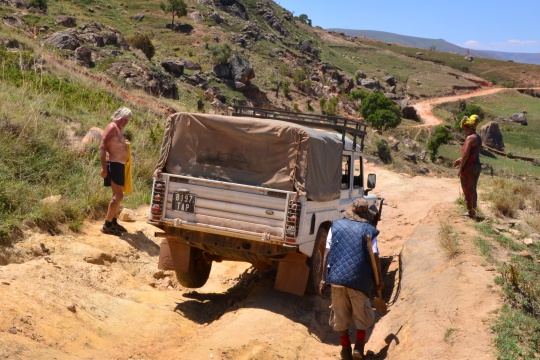 I guess this is 3×4 wheel drive driving!

As James Brown would have said about the next challenge: ‘Take it to the Bridge!’ 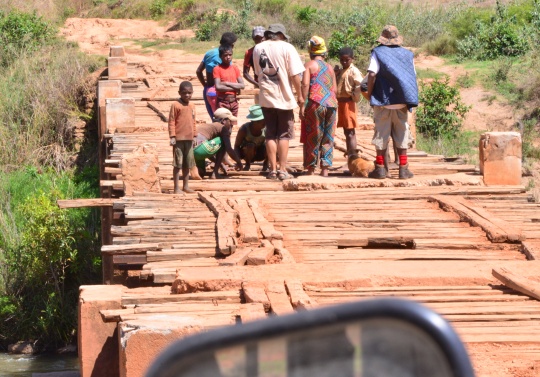 ‘Take it to the Bridge!’

I know that a few days ago I would have gladly missed out on this outing, but I’m very glad that Christophe encouraged me to have made this unforgettable adventure!

Thank you Christophe – fantastic driving, thank you Nadia for your great cooking and thank you Jean for showing us some great plants!