One of the disadvantages of staying in any set of cabañas is that there is no breakfast included. Never mind, something will be open at Guanaqueros to put food in our stomachs! Wrong!

Never mind, we’ll have coffee and bread rolls at the Pronto at the Ovalle turn off and then go to Fray Jorge for a more detailed look around. Wrong again – the Fray Jorge turning is north of, i.e. BEFORE the Pronto, so I missed breakfast – well, survived on a couple of chocolate drinks and biscuits, but managed lunch at the Copec! which, by the way, has been nicely refurbished, does a small range of hot snacks instead of just hot dogs, has a proper new seating area and a special Baños block. BTW, it looks as though there is a small new hotel next door as well that I might check out later.

We went back to Fray Jorge and this time went on to the entrance gate. (S2950). Same gate (but poorer condition) as always, since 2001, but completely different track. Looking back through my notes, the track changed to this one after our 2006 trip. But there are now many houses, some arranged into communities, along the track. As a result, the track has been re-drawn many times to include the optimum number of communities with new side tracks leading (sign-posted) to others.

Where once there were flat areas that were the home of Eriosyce aurata, perhaps threatened in their survival by goats trampling their seedlings, there were now fields of grain, a mixture of wheat, barley and oats (on the side), quite wide spread – a poor yield by European standards, and completely replacing any cacti. Perhaps the gate to the park had moved as well [PS, no, it hasn’t] – a wooden hut and a pile of stones are easily moved. In 2001, 2003 and 2004 I clearly remember many Puya and hills full of ceroids – now there were just a few of each. No signs of Eriosyce aurata here as there had been in the past. The track between R5 and the gate was wider and of a better quality, but longer. As in many other places, we felt more like tourists rather than explorers. Shame.

Other cars pulled up, the occupants spending an age smothering themselves with sunblock, before strapping on much-too-large rucksacks and boldly marching past the gate. We could see them hesitate as they reached the little empty hut, some 100 yards in, look at each other, drop their heads and come back out to disappear in a cloud of dust in their rental cars. Clearly first time European tourists.

No point creating a tourism image if you can’t live up to the billing when the tourists arrive.

On the way back we saw signs and a track for Caleta El Sauce and Caleta Tarcarucal, just north of the park and decided to follow the track. We had already passed tracks that warned us of ‘no entry’ with company names that we were to see again later as we passed the wind turbine parks along R5. Yes, they are also putting up wind turbines on the edge of Fray Jorge. Better than building another pollution belching fossil fuel power station anywhere or to drive by towns and villages deprived of electricity. The track went over the hills and eventually the Pacific Ocean opened up before us.

We stopped (S2951) and saw some ‘funny ceroids’ amongst the Trichoes and Eulychnia acida, so time for a closer look. Here, barely able to see the Ocean, was Eulychnia castanea, the farthest inland plants I have recorded. There were many ceroid crests on stems without evidence of flowering, so that we were unable to tell if they were Echinopsis / Trichocereus or Eulychnia. There were also Eriosyce, but not E. aurata. Where is Juan when you need him? 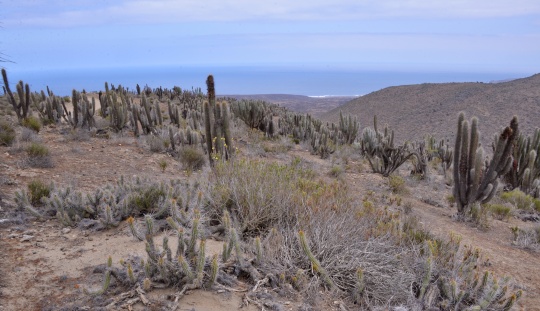 S2951 Eulychnia castanea – I can just see the Ocean – the plant can’t! 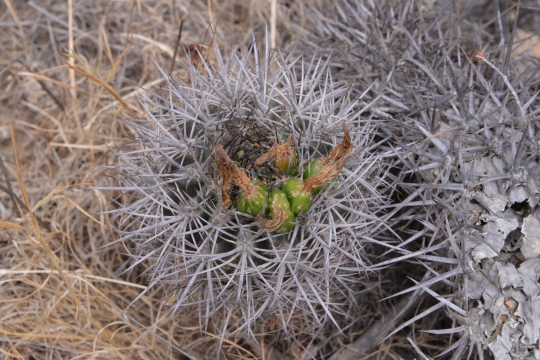 Then the road zigzagged down hill, twisting around the hillside along the way. Shortly before reaching the coast, there they were: Copiapoa coquimbana – a very nice stand of plants, many in flower S2952. I snapped away many shots while JYC was doing his analysis to discover where in his key to the genus these plants would come out. ‘Nice consistent plants, compared to Sunday’s bunch at Freirina?’ I asked. ‘No’ was the answer, much to my surprise, there are ribbed and tuberculate plants here and according to the description in the NCL, coquimbana is only supposed to have tuberculate stems – the key suggests that the ribbed plants are C. echinoides, which clearly they are not. To me the population looked to consist of one species, and JYC agreed, but I had not taken the more detailed look. What the plants actually showed and had in common were tuberculate ribs, with the degree of tubercles perhaps determined by age and/or turgidity, rather than genetic factors, but that is just an assumption. At least it explains why I wanted to make a Coquimbanathon because I believed that I saw more than one species amongst the plants south of the Rio Huasco (accepting fiedleriana and alticostata as odd-balls along the edges. Very interesting. 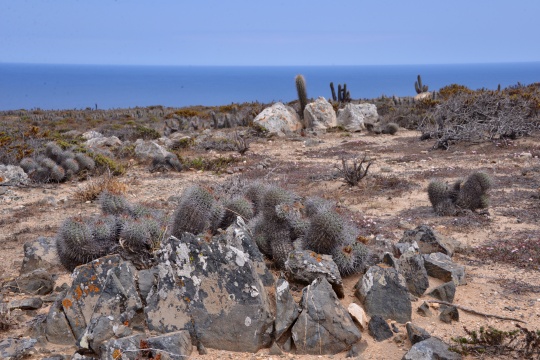 The E. castanea also looked a bit strange, with ripe fruits looking very scaly, more like E. acida, but then I had observed on earlier visits that ripe Eulychnia fruits shed their hairs when ripe enough to fall to the ground where they ‘explode’ on impact and scatter their seeds. so why not E. castanea? But there was more to come.

After finding the C. coquimbana stand we really had to turn round – I needed food. This track was ideal for a return visit in days to come, provided I get a suitable replacement vehicle tomorrow.

After hotdogs, oatmeal cookies and a double expresso at the Copec Punto, we headed south. As we passed Caleta La Cebada I told JYC that the next exit, at Bahia Teniente, was where the southernmost Copiapoa, C. coquimbana syn. C. pendulina grows. The problem was that access to these plants was difficult with the exit from R5 to Bahia Teniente now blocked – or was it? As we came down the hill I checked my rear view mirror for lorries thundering down the hill behind me – there were none. I slowed down and saw a small gap in the fence with a cattle grid to prevent goats etc escaping on to the PanAm. and so we found ourselves in, on a dirt track, bouncing towards the coast. I recognised the track and some rocks where I believed Leo, Juan and I had stopped on a previous visit, with appropriate GPS data, and had found the Copiapoa. This time, without GPS data and with the usual time constraints, we allowed ourselves a 30 minute look around (S2954) and found Eriosyce subgibbosa and Eulychnia castanea.

But on one spot, there was a typical sprawling Eulychnia castanea next to a very tall robust upright plant that I would assume was E. acida. Much to my surprise its hypanthium was covered in large scales (acida feature) and spines! (castanea feature) but the plants growth habit was wrong for E. castanea! Back to the drawing board. New species? No. Hybrid / intermediate? Who knows! Interesting? You bet!

S2954 But based on the spiny hypanthium, it’s Eulychnia castanea!

We arrived in Pichidangui just before 18:00 hrs and found a room in Hotel Rosa Nautica, as before, and enjoyed our last dinner & wine together at Restaurant Nautiluz [sic]. The end of Jonathan’s trip, bar the Airport run and the flight home. Thanks for your company – we’ll have to do it again sometime.