A quick look at the map suggested a day into the mountainous hinterland – heading to Andacollo. I believe Ritter named a Neoporteria after that place. The choice seemed to be to head up towards Coquimbo and then south east, or south to Ovalle and head north east. The area seems to be ‘two valleys along’ from Hurtado, famous for its ‘golden balls’ Eriosyce aurata.

I was pleasantly surprised when SatNav told me that the journey there would only take me 35 minutes! The map had shown me a dubious unpaved track that I had decided to avoid, but which turned out to be brand new asphalt with the paint still drying on the bright white lines! Time for a change of mind. The disadvantage of such new roads is that they offer few if any opportunities to pull over and usually have a barbed wire fence along both sides to show adjoining landowners where there properties stop, thus reducing the opportunity for farmers to put their diggers through cables etc. Anyway, this was one such road, mainly taking me through agricultural developed land with a Eulychnia confusing me – ‘built’ like E. acida but with the hypanthium like E. breviflora – the words intermediate / hybrids are all too easy to explain this away. No place to pull over for a shot, but might try again on a weekday with perhaps less traffic.

The small town (c 10,000 inhabitants) boasts a huge basilica, built in honour of the Black Virgin. It must have been her birthday, as the town was closed for traffic and everyone was walking in towards the Plaza where music suggested something was happening.

Having gotten here so quickly I tried to find the road out to Hurtado, but failed. So, it was back the way I came, with a short stop at the one lay-by I had identified on the way up – as you can see on the map, there is an impressive road full of switch backs that leads into the hills (S2960). Spotted one clump of cacti – Eriosyce or Copiapoa, too far away to tell, but being on my own was not the time for mountaineering heroics, so a zoom lens picture will have to do.

Back too early, I headed for Tongoy, another seaside resort, for some late lunch empanadas, but this town too was closed for traffic. Market day, it seems. A quick look at Playa Blanca, looking nice and quaint on the map but in reality a mass of new built time share homes on the beach, waiting for the next tsunami.

But I did come across the strange Eulychnia breviflora again, so I managed to take some pictures this time (S2962). E. castanea is also still around (northern end of its range). The top part of the hypanthium is ‘bald’, like E. acida, but the lower part is covered in long honey coloured wool, typically of E. breviflora. These were stands of tall, erect stems, taller than the usual stems of E. breviflora seen elsewhere. Flowering was near the top of the stems, but not apical, as is usual in E. breviflora. I believe that I have seen similar flowers before, from memory in 2007, at Totoralillo, one of many locations by that name, this one a tourist spot south of Coquimbo. These differences are not sufficient to consider these plants to be a different taxon, but interesting non the less. Perhaps a population name is justified and as I spotted them first near the village of Tambillo, I guess ‘tambilloensis‘ will do, although its distribution is wider than just this village. More information to check out. 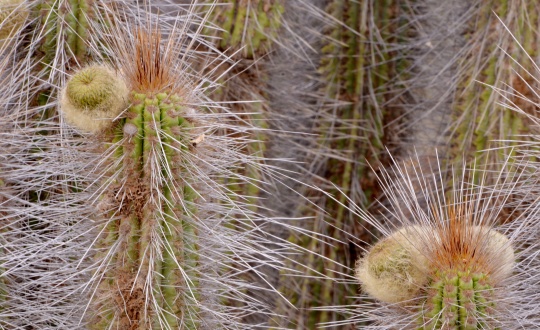 Off to El Pequeño for dinner soon – beef for a change – if I have any more fish, I’ll grow gills!