A quick summary of the last day of the official convention:

Breakfast at 7:15 preceded the final plant sales and at 8:55 the bell called us back to the hall where I was first on the bill, presenting the ‘world premiere’ of a new presentation called ‘FOG’, the result of (another) night of too much Belgian beer at ELK when I observed that after seeing the camanchaca in Chile, the garua in Peru, the ‘marine layer’ in California, I should really go and see the results of a similar fog along the Skeleton Coast along the edge of the Namib Desert. In 2012 I went on a 9 week trip to South Africa and Namibia to do just that and so built up a nice portfolio of the flora that is found at and around the tropics of Cancer and Capricorne. A great excuse to show a very diverse selection of plants that thrive (or perhaps ‘survive’ is more appropriate) in these hard environments. Living on the edge! 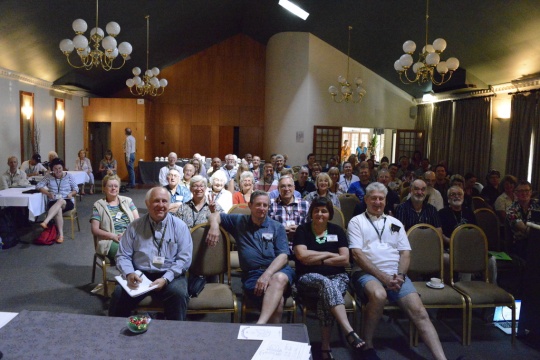 A speaker’s view: my audience at the start of the world premiere of FOG that I hope to use in next year’s ‘What I Saw Last Winter’ presentations.

Next, Ruth Higgins showed us the Crassulaceae seen in Oaxaca, Mexico, an excellent presentation of what I can look forward when I plan to visit the area in 2015.

After the morning tea break Terry Tierney showed off some of his Asclepiadaceae, of which we’ll see more when Ruth and John take me on a private visit later during my stay.

Karen Zimmerman followed with her second presentation: An Insider’s Tour of the Desert Collections, in the place where she works, The Huntington Botanic Gardens in San Marino in California. I visit this garden every time that I’m in LA and already look forward to my next visit in February 2015. Again, the corner where the Creeping Devils creep around was a highlight for me.

Paul Forster presented the Haworthia Wars Part II, explaining the rational behind the splitting of this popular genus into three. In the absence of a taxonomy police to inspect the labeling of our plants, I wonder how long it will take before all the labels in our collections have been changed.

After lunch, Dan Downie presented Lophophora – the Peyote Cactus, a courageous talk without the distraction of digital wizardry to read out some interesting facts about what must be the most written about cactus on the planet.I find that all the taxa in the genus look very similar, but understand that each differ in the alkaloids that they contain, so I guess that one needs to have a good chew on them when encountered in the field, to be able to decide on the species name.

Ernst van Jaarsveld closed the proceedings with a very interesting talk: Welwitschia mirabilis – a living fossil from the Namib Desert. Again, for me, the talk was a mixture of bringing back happy memories of seeing this icon of the Namib fog desert in the wild and learning (for me) new facts about this plant such as the fact that fossil evidence has been found in NW Brasil that suggests that this plant was around at the time that the continents split and Dinosaurs walked the planet. As I mentioned earlier, I am very happy to have the biggest and best book ever produced on a single taxon, well two if you count the namibian and angolan subspecies.