I forgot to mention that yesterday our car, a Land Rover Defender 2010, suffered a flat battery as we left the second ferry crossing on Wednesday. Not a huge problem, as we were on a down facing slope and it never takes more than a few minutes for a group of locals, mainly children, to crowd around us to request ‘bonbons’ (sweets) or a cadeau (present). As a result we had more volunteers than could find space on the rear bumper to give us a push. However, it was a little surprising that the battery had become flat, given all the miles that we had been driving. A replacement battery was obtained at Hotel Orchidee that worked fine yesterday, but required another team of pushers this morning. Clearly there was a different problem – related to the charging of the battery, rather than its ability to hold its charge.

It is remarkable how religious a group of non religion practising people are, when faced in the middle of nowhere with a car that has developed a problem. Prayers were quietly said in the car, parked down hill when possible.

We had to cross the two ferries again on the way back to Morondova and while a party of pushers had been alerted to our predicament, a loud cheer went up each time as the car responded to the turn of the ignition key. 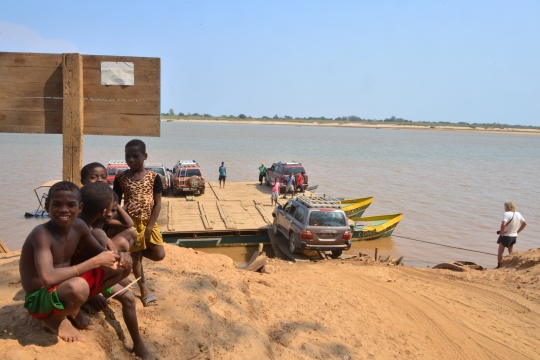 The second ferry, with a potential team of pushers, just in case …

In Morondova, we arrived safely at the, again, very comfortable Hotel Chez Maggie where wifi was available if the town’s electricity was on, which happened at infrequent intervals. Even then, this was far removed from broadband, able to download a few emails, but certainly not images or Diary postings.