I believe that last night was the first without a mosquito net over the bed. Christophe assured us that there were no mossies this high (too cold) and no standing water that is needed in the mossie life cycle. The Anja Community Reserve consists of some 30 hectare of dry forest nestled at the base of three, large granite mountains that dominate the landscape. Guides were at hand to take us on a range of walks. With other places to see on our way to the next destination, we opted for the short circuit, but unbeknown to us, Christophe asked for a customised extension so that we could add to our tally of succulent plants seen in nature.

I looked forward to the opportunity to photograph some more lemurs but was also pleased to see an impromptu appearance of a Chameleon. Again, there were two guides, a wildlife spotter and a guide who was fluent in English and provided explanations and names of plants.

The ID of Chameleons is quite tricky, due to their ability to ‘change colour’ to merge in with their surroundings, so that the one that you see can look quite different to the ones in images on the internet. And of course, it’s always difficult to tell fact from fiction on information found on the internet. With a deep interest in a specialist subject like cacti, you get to know the sites that are reliable and those that are just pure fantasy. The name Zonosaurus madagascariensis was suggested on the Anja website, but searching for images of lizards under that name shows quite a different reptile.  With over 200 species of Chameleon recorded, I’ll need to look at quite a few more images before I can spot a match. So if you are sure that you know the correct ID of this and other lizards (incl. chameleons) then I’d be glad to hear your opinions.

As things must have a name, I’ve christened it Chammy again. Having found us the Chameleon in a tree, our spotter ran off again and came back with some grasshoppers that he had caught, pricked on the end of a stick and waved it some 20-30 cm from the Chameleon. Chammy would lean towards the insect and, quick as a flash, would fire it’s rolled up tongue, catch the cricket and swallow before I could focus my camera – again shooting against the light and with numerous twigs and leaves in the way was quite a challenge. All my attempts to catch the action failed. I should have tried movie mode, but how many grasshoppers can a chameleon eat before it is full for the day?

Our spotter called to tell us that the lemurs – ring tailed, i.e. Lemur catta, had arrived. We moved to a spot at the edge of the forest where some small reservoirs had been dug that contained water. The lemurs, again, some with young on their back, had come to drink and also seemed keen to lick the rocks. Our guide explained that the leaves that Lemurs eat in the forest contain toxins and that the animals come to drink and lick the rocks for minerals that counteract the toxins.

This was an ideal location for photography and I have (way too?) many images and some video as well.

They found another family, this time of nocturnal lemurs, for us, but these were hidden, high in the trees, so impossible to get any half decent shots. The rest of the 90 minute walk was focussed on plants. Lots of (for me) new and unfamiliar names, probably ignorant of the significance (rarity) of some of them. I’ll stick to showing you some of the things that impressed me the most, probably because I had the species at home or because of the unusual nature of the plants:

Rhipsalis baccifera is the only cactus believed to occur in nature in the Old World. It is usually accepted that the Cactaceae evolved after the earth’s surfaces broke up and the super continent, Gondwana split, simplistically creating the New World (the Americas) and the Old World (Europe, Africa and Asia). So how did this cactus get to ‘the other side’ of the planet? Discussions on the subject range from long studies and numerous scientific papers, to conversations around camp fires and meetings of cactus enthusiasts, usually accompanied by plentiful supplies of alcohol and rarely based on correct and accurately remembered facts. Definitely a plant of interest that previously I had seen in its accepted homeland of Brazil.

Next, soon after I slipped and lost my footing on the narrow path (no harm done, just a bruised leg and pride) we passed an impressive Orchid, in flower:

You may recall how a few days ago in the Arboretum d’ Antsokay we found, photographed and videoed what I described at ‘huge mealy bugs’. These have since been IDed as a Madagascan flatid bug, Phromnia rosea. Then we only saw the nymph phase of the bug. Here was saw both the nymph and adult phases: 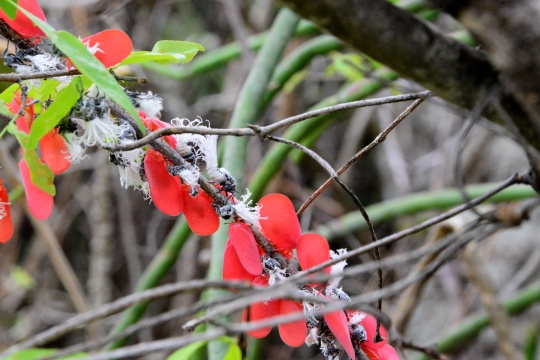 Finally, we were shown to a rock, in the shade of trees, where a ‘recently discovered Aloe’ grew. Earlier this year, while giving a talk at BCSS Wiltshire Branch where a member is a keen grower of Malagasy succulents was offering an Aloe for sale that was the plant seen here:

Quite a range and number of interesting things, and it was only approaching midday!

Just outside the Reserve we made our next Stop, S3519, where we saw Euphorbia alluaudia subsp. alluaudia 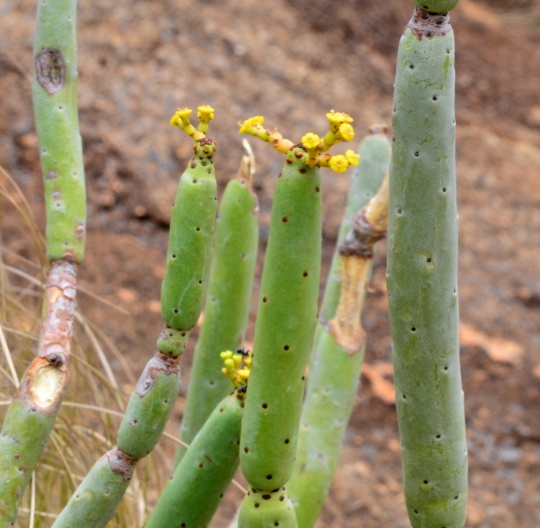 Earlier in the trip I had mentioned that I had enjoyed Chinese meals in every country that I had visited. Keen to add Madagascar to the list we had lunch in the town of Fianarantsoa, where Christophe knew a good Chinese restaurant, The Panda Restaurant that even gets a 4.5 star-rating on Tripadvisor! As soon as we had stopped, we were surrounding by the usual group of kids and teenagers. Instead of begging for sweets and presents, these youngsters spoke good English and were selling post cards that they claimed that they had made at school. Where do you learn your English, I asked. At school. I explained the I was Dutch, and immediately a few of the kids switched to German! I was impressed but explained that being Dutch meant that I came from Holland, not Germany. ‘Ask me to buy cards in Dutch and I’ll buy some’, I joked. When we came out of the Chinese, a few of the kids were still there and one of them said ‘Goede morgen, heeft U een kadootje voor mij?’in reasonable Dutch! There are lots of foreign volunteer workers in Madagascar and clearly this included a Dutch or Flemish speaking person who had been consulted. Well done! Enterprising! I bought ten of his card as a reward. He was ever so pleased and has shown his friends that the best get rich.

I still have to get together with John to swap our images. He may have pictures of my negotiations.