The small family run Clanwilliam Hotel was full to the brim. We had been lucky to have found beds for the night as there was a large family wedding this weekend with many guests spending the weekend in town. At first our request for beds had been met with hesitation, but by moving some family members together they had freed up a triple room for the boys and another room, not usually used for guests, as a single for Eunice.  Unfortunately there was no wifi for the guests, so that this is where the backlog of my Diary reports from the field began. This was particularly frustrating as we could see a signal from the Clanwilliam Hotel router, but this was a secure network and the owners were not prepared to share its password with us during our stay. Shame.

Clanwilliam seemed a very quiet place, until I realised that my cold had impacted on my hearing and I was hearing things as if I was at the bottom of a swimming pool.

Today we had planned a day around Clanwilliam that resulted in 5 stops. We headed east out of town on the R364 and stopped on the ascend to the Pakhuispas (S2567) as David and Eunice had spotted clumps of Euphorbias (E. loricata and E. tuberculata) along the road, as well as the by now apparently omnipresent Tylecodon paniculatus. I recorded this plant at a total of 22 stops, and probably saw, but did not photograph it, at many more spots leaving me under the impression that it is one of the most common succulents in the Western and Northern Cape, also stretching into the little bit of the Eastern Cape that we saw, as far east as Graaf-Reinet and close to Port Elisabeth. I had heard that this plant, and other Tylecodon species were threatened as they were being removed from grazing land by farmers, as they are attractive, but poisonous to cattle, sheep and goats (and humans) due to poisons that can affect the nervous and muscle systems, causing ‘krimpsiekte’ (cramp disease) that can kill those that ingest parts of the plant. These poisons are also found in the closely related genus Cotyledon that are similarly removed if found by farmers. The extend of their range and the numbers that we saw gives the impression that they are as common as weeds and are far from being threatened with extinction. If, however, mankind should put its mind to eradicating these plants for economic reasons, than their numbers might well decrease.

S2568 was farther along the R364, near Soldaatkop (Soldier’s Head) rock on the Pakhuispas. Here we found an Aloe sp., Euphorbia loricata, a Pelargonium sp. and a Conophytum suggested by David as C. comptonii. There was also a strange but photogenic non-succulent plant: large very shiny leaves that seemed to cover the soil on which the plants grew like cling-film. A bit of searching soon revealed this to be Arctopus echinatus, a geophyte with spiny leaves. Finally, hiding in dark ledges in quite damp conditions grew a not particularly succulent Crassula capensis. 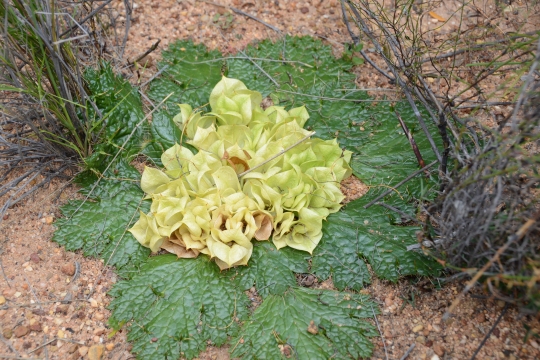 Farther along the R364 – east of the Pakhuispas we made another stop (S2569), this time for some wildflowers. The GPS data embedded in the images that I took, plotted onto Google Earth once I got home, reveals that we were 770 m west of  the grave of C Louis Leipoldt.

We took a track off the R364 for S2570, offering some nice views over Clanwilliam. Here the new plant on my list was Tylecodon wallachii. Again, due to novelty value and my ignorance, I took probably too many pictures of these plants, but like T. paniculatus, this would be another plant with a huge distribution area over which it was seen in large numbers. The long finger-like succulent leaves and the phyllopodia (swollen leaf bases – yes, I had to look that one up too) that are left on the stem as the leaves shrivel away as Spring turns to Summer, make it a plant that is easy to distinguish from the Boterboom. 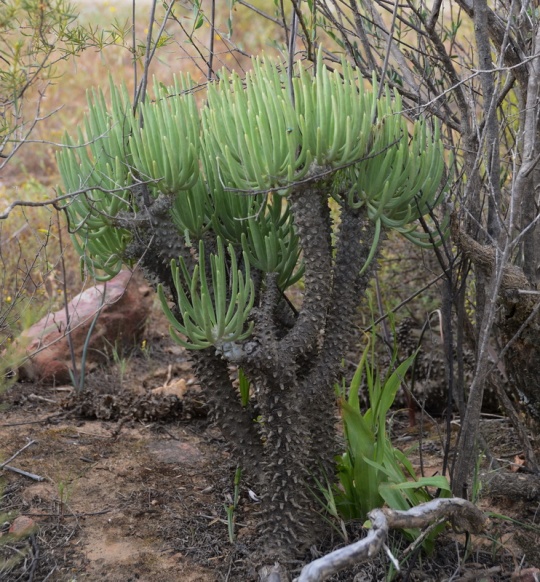 At S2571 the two Tylecodon species were growing side by side and the new kid on the block was Anacampseros retusa, a genus of which we would see other examples in weeks to come.

I’m not quite sure how I managed to get through the day and my memories of the day are somewhat vague as by now I was running a temperature, but kept telling myself that there was no time to be ill.

I discovered that the D600 works very well in point-and-shoot mode and, as I was still using a DX zoom lens on an FX camera, found the area that the camera could see, which is larger than the framed area in the centre of the view finder that will become the images when the shutter is pressed, quite useful in deciding if the composition could be improved by zooming in or out. With the D300 I tended to fine tune images quite often to reduce the exposure, contrast and fill in lighting. With the D600 I find the need to adjust images rarely, after setting the exposure to under-expose by one-third of a stop. No regrets at the impulse purchase.