Wednesday, 26 September 2012 – To Nieuwoudtville and back

Many people had told us of the magnificent views from Compton’s Corner at the top of the Vanrhynsdorppas. As David drove us from Vredendal to Vanrhynsdorp, the Matzikana Mountains were shrouded in clouds – not a good sign! We had been very lucky with the weather yesterday. Despite me and now also Eunice suffering from bad colds – not surprising considering the amount of time that we spent in the same car, we carried on.

As we drove up the pass, the wows, yelps and other exclaimations were not for the view, but because the fog and mist were getting thicker and thicker – we were not reassured when our driver said that he could not see the edge of the road! So we screamed each time another car loomed out of the fog on its way down hill.

Since there was no reason to stop at Compton’s Corner at the top of the Pass – we had driven past the entrance to the car park before we realised it was there – we turned off the main road following signs to the waterfall. People back home had suggested that this would not be worth a visit as it never seems to be in flow. Not this time! And the fog seemed to be lifting a little too, but it was not much fun in the drizzle – Eunice stayed with car.

I’ll include this image of a Crassula sp in the hope that somebody can suggest the species name.

Back towards Nieuwoudtville we saw a sign to a Quiver Tree forest and with little else to tempt us in this weather, we took a look (S2582). Even in the wet, these plants looked impressive enough for me to add another 60 images to my collection. 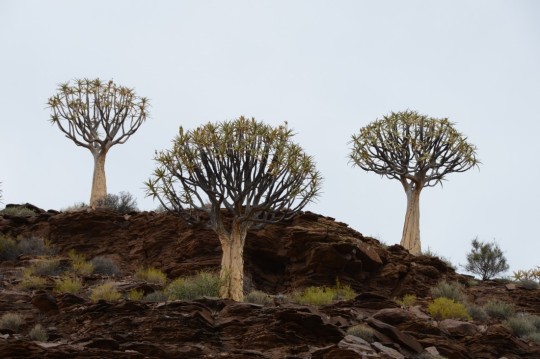 Eunice, now shivvering with fever, despite being wrapped up in jumpers and coats, asked if we could drop her off back at the hotel in Vredendal. Sensible. So what to do for the afternoon? Curled up in the corner of the car and by now taking antibiotics, I suggested a trip to the beach. Cliff & David looked at me as if I had lost my mind, but with no other suggestions on the table, we headed off to Luderitzville and from there took the turning to Strandfontein where I had vague memories of someone telling me at ELK of an interesting Mesemb growing on the beach. We looked, but failed to find anything of interest.(S2583). On the way back, with daylight quickly fading under the overcast sky, I spotted something growing along the side of the road – interesting enough for me to shout ‘Stop!’ It turned out that on the otherside of a too high to climb fence, there were quite a few Euphorbia, later identified as E. schoenlandii, nice plants, but in poor light. With nothing to lose, I pushed the ISO ratings on the camera up, increasing its light sensitivity but at the expense of quality, caused by ‘noise’ in digital photography. The D600 did very well, producing some useable shots, after I had spotted a stretch where the fence had fallen over. (S2584)

Pleased with this late-in-the-day succcess we returned to Vredendal, looking forward to another fillet steak at a very reasonable price at Paiter’s Grill & Restaurant.

Tomorrow we’ll head north at a faster rate than planned, hoping to find dry weather, warmth and sunshine closer to the equator, and hoping that the weather will have improved by the time that we get back here in just under a month’s time.