Today we had opted for a day to the south of Springbok, aiming for Soebatsfontein. We headed south along the N7 and then turned west towards the Namaqua National Park.

After an hour’s drive we were looking for somewhere to stretch our legs when we saw a hillside covered in tall (1m 50 or 5ft tall) flower stems, now passed over, clearly with a bulb below the soil. We passed a farm, sign posted as the Zandkraal Farm, the property of Jan & Vicky Engelbreght and I went to ask permission to look around on the nearby hillside. There were actually three residencies here at the end of the track. Looking for signs of life, I had to choose between the house to the left, with some huge dogs trying to break through the fence and one on the right where two people were doing some gardening – an easy choice. The gardeners spoke Afrikaans, not too great a challenge as I am Dutch and took me to de baas, (the boss) who was fluent in English and keen to have a chat. People living in these isolated locations often don’t see strangers for weeks on end and love to have a chat. Hearing that I was from Holland he told me that his daughter was married to a Belgian and lived in Oostende. I told him that I had friends in Oostende and after a few minutes got round to asking permission to take photos on the hill on his side of the track leading to the Zandkraal. No problem, came the answer.

As soon as we had crossed the fence, our attention was drawn to several Asclepiads, provisionally identified as Quaqua sp. 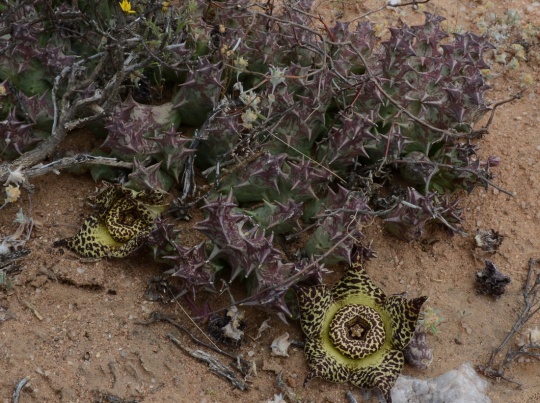 More flower stalks – this time Cotyledon sp in full flower, rather than bulbs. 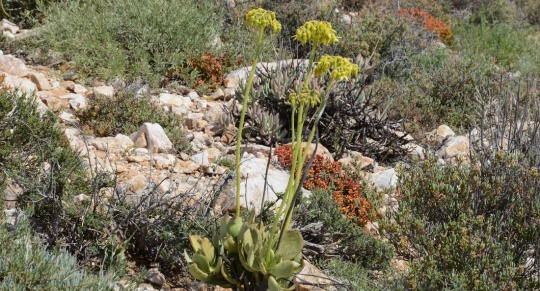 I went back down the hill to pick up the car and meet the others at the gate. I was met by an angry couple, what was I doing on their land?  I explained that I had been to the farm and had obtained permission to look for plants on the quartz hill. I tried to provide details to convince them that I had honestly asked permission. The man shrugged his shoulders and told me to leave. His wife carried on telling me off. I explained that the man I had spoken to had a daughter who had married a Belgian. Ah, the penny dropped. I had spoken to their neighbour but his land was on the other side of the hill; we were on their property. That calmed her a bit, she explained that they had some sheep stolen a few days ago and were tense about more rustlers in the area. All was well that ends well.

For S2691 we had now entered the Namaqua National Park and were descending the Wildeperdehoekpass (Wild Horses Pass) with some wonderful views that would have even better without the low clouds drifting in from the Ocean, some 25 km (25 miles) away. We found a nice quartz patch, so again started the puzzle of identifying what we saw – Ah, never mind, here are some images. The nicest plants here were probably Crassula alstonii, but I have already shown images of that plant at previous stops. 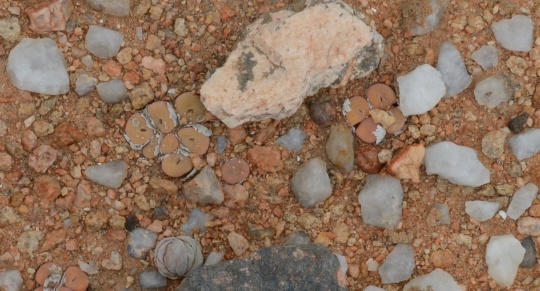 Ah, good, C. alstonii managed to creep into the image as well! Here is another two plants in one shot: 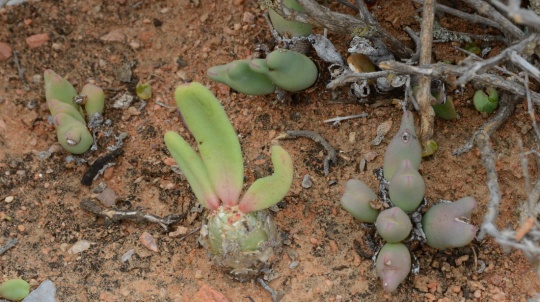 And so on to S2692, for which I won’t give away any location details as we had been entrusted with data for a quite desirable and, from what we could see, a rare plant 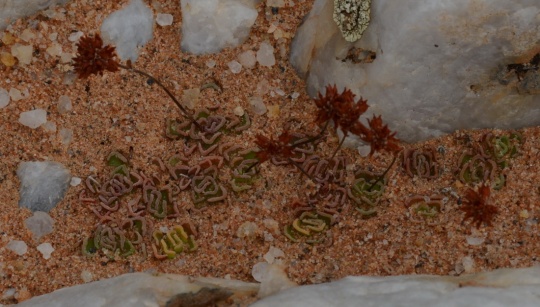 As is usual with rare and sought after plants, they were minute and when David first found them, they were completely covered in sand. A few huffs and puffs later gave a better view of the plants. We made sure that our footprints and plants were covered up and hidden again before we left.