During the planning stages of this trip I had suggested that we should allow some elasticity in the planning by including a few rest days. After all, the full on approach of looking for plants may be fine for a three week trip but nine weeks without a break from each other ultimately causes stresses and tensions. My suggestion was met with a resounding ‘No’ at the time. Oh well.

It was therefore no great surprise that over breakfast David announced that he was going to stay at the hotel today. Within minutes, Cliff announced that he too was staying ‘home’ today, to go shopping for a new pair of boots as the ones he had brought along had given up. That left Eunice and me to make some on the spot plans for today.

When we had stayed in Vredendal before, Eunice had been suffering from a bad cold and half way through the day had asked to be taken back to the hotel to recover. That day (26 September) Cliff, David and I had then driven on to Strandfontein and late in the day (poor light) had seen some nice Euphorbia schoenlandii near Papendorp. As Eunice had missed seeing these and my shutter finger was itching to take more pictures, we decided to go and take another look.

Heading out on the R363 to Luderitz we again passed underneath an impressive railway viaduct that crosses the Olifants River. We stopped to take some pictures on this very scenic spot – I’m sure that I had seen the view on tourist posters for the area – and we were lucky to catch a train crossing the viaduct. We had seen trains in the Knersvlakte yesterday and, without counting the number of carriages, had been impressed with their length. Was this the same railway line with the same trains? What were they carrying? They looked like the long trains that we had seen in Chile that carry ore and coal, rather than those in the US that carry containers from China from the ports ultimately to the consumers around the country. The saying in the US used to be ‘You bought it, a truck brought it’ but these days trains have taken over that chore. Our friend Alain in Belgium works for the Belgian Railways and even on holidays takes a great interest in the local trains, so I decided to try to find out a bit more about this one on Google, once I got home. But first of all, here is the view (S2723):

From Wikipedia: ‘The Sishen-Saldanha railway line, also known as the Ore Export Line, is an 861 kilometres (535 mi) long heavy haul railway line in South Africa. It connects iron ore mines near Sishen in the Northern Cape with the port at Saldanha Bay in the Western Cape. It is used primarily to transport iron ore and does not carry passenger traffic. The railway crosses the Olifants River on a 1,035 metres (3,396 ft) viaduct between Vredendal and Lutzville and reaches the coast about 160 kilometres (100 mi) north of Saldanha. From here it follows a coastal route. These 41,400 tonnes total mass, 3780 metres long trains (8 locomotives and 342 wagons), are the longest production trains in the world.’

S2724 was a touristy stop at Strandfontein, S2725: the same for the lighthouse at Dooringbaai, and S2726 at Lamberts Bay. We left the best to last: S2727 at Papendorp at the mouth of the Olifants River where the Euphorbia schoenlandii this time were bathing in sunshine. 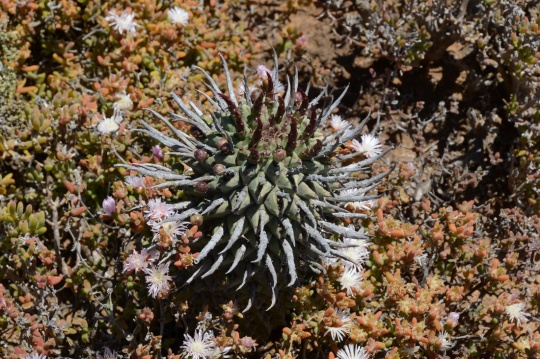 It was much too early to return to the hotel, so we drove past Vredendal, to Vanrhynsdorp for a visit to the Kokerboom succulent plant nursery (S2728). Unlike nurseries in Europe where glass cover is needed to protect the plants from rain and cold, here the plants need to be protected from too much heat and sun. It was useful to see the plants that we had seen in habitat, now with labels. It might even suggest some names for my Argyroderma dilemma!