Last night I finally spotted a reasonably priced leather African safari hat. I have a collection of hats from various trips, more as souvenirs, one day to be displayed (gather dust?) at home rather than to ‘blend in with the natives’, as an American friend had told me he tried to do in Argentina – he failed, so I have no reason to believe that I could do any better. The hat was carefully examined for tell-tale signs to suggest that it was not authentic – signs such as ‘Made in China’. I was assured by the shop owner that the manufacturer was an authentic traditional African hat maker. I could now at least proudly walk along David who had worn a similar hat since day one of our trip, until this morning he revealed that his hat was Australian. Oh, well.

Our goal today was to find a rather choice Haworthia. Back in the UK we had received a map with some pencil markings and photo taken by a friend standing at the location that we were looking for with a view to a farm and some stables – land marks that should help us to find this spot. There had been some very detailed verbal instructions as well, but by now you’ll have got a feel for the reliability of my memory so I’ll say it again: in future I will write it down. So, my  fingers were crossed as we left Addo.

Today I am again relying on images taken at each stop to shake off the cobwebs and remind me of what we saw and where we saw it – yesterday’s attempt to write the Diaries this way were very enjoyable, like reliving the best parts of the trip again. We took the R336 and headed west out of Addo. After the deserted track yesterday afternoon, we had now landed in a tourist hotspot surrounded by guesthouses and B&Bs. Some 30 km after leaving the bungalow apartment in Addo we stopped off the R336 (S2777). No new or exciting plants here, but included in this Stop’s folder the only and best pictures I could manage of an animal I had hoped to see more of – they make it all look so easy on TV;

I had even brought along a T-shirt, showing a family of these entertaining creatures posing among some empty beer cans with the slogan ‘Beerkats’. Angie and I must have hundreds of images of these animals in zoos, wildlife- and safari parks, most much better than this image – but these are the real thing, in nature and I was probably the only one in the car to catch them posing.

We found the R75 and headed for Kleinpoort. Just before the village, we stopped (S2778) to take a picture of this ant:

or to be precise, for a stand of Euphorbia, many stems over 2 m (6 ft) tall and covered in these yellow cyathia (‘flowers’).

Soon after we set off again, we took the road signposted to Springbokvlakte, the name of the farm where ‘our’ Haworthia, H. springbokvlakensis comes from. The road was cut through a stony ridge and as we dropped some 50 m in altitude we spotted very picturesque Euphorbia growing on the rocks.

S2780 was another stop for a field of medusoid Euphorbia, just like the yellow flowered fields a few days back, but this time with flowering mostly over and just one or two white cyathia lefty. I understand that this is Euphorbia inermis or is it E. esculenta? These plants looked as thoughh they were of significant age, with lower arms having died off leaving a thick trunk, making some plants look like massive mushrooms. 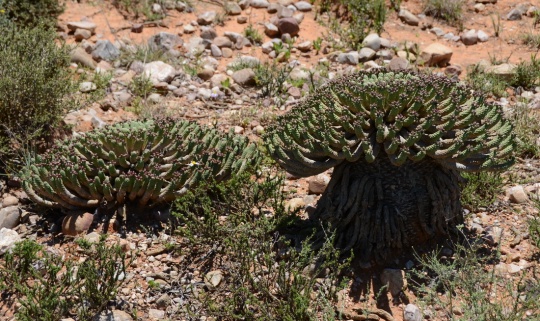 By now I had the printout of the map and the photo taken at the location in my hand and it struck me that although things had seemed very clear back home, here, in the field, we had another needle in a haystack. Eunice’s SatNav had confusing locations for the farm and the alternative mapping program now running on her laptop suggested that there were at least five farms of this name. The other complication was that farms that we passed had no names at the roadside, just name plates on the farmhouse, too far from the road to read and often with huge dogs along the path between the gate and the house. This was not going to be easy.

We made a few stops (grouped as S2781) in the faint and stupid hope that by standing near the roadside fence, the plants would see us, wave at us and shout ‘We’re here!!’ which of course did not happen.

The scenery certainly suggested that we were in the right place; ‘vlakte’ means ‘plain’ in Dutch and landscapes do not get much plainer than this:

We hit the jackpot at the next stop and met the very nice owners of the farm (S2782) and were taken to the plants. These Diaries are not the place to tell the full story, but don’t be surprised is one or more of pen an article for this visit. In the mean time, enjoy the pictures. You’ll have to imagine the 30C degrees heat that we experienced while taking them. 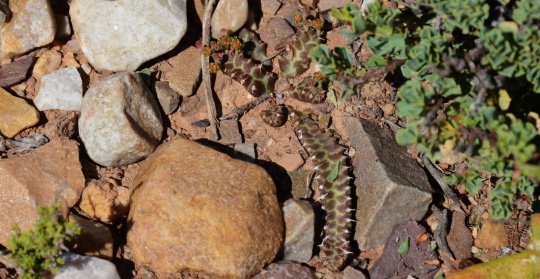 We found comfortable accommodation in Steyterville, a town that I had not heard off until we got there. We’d had another great day!