It would be hard to follow up yesterday’s Haworthia springbokvlakensis stop with another such an exciting day, so we didn’t. We headed for Uniondale, where we knew that a wonderful ‘blue’ Euphorbia horrida grows. We followed the R329 and after some 75 km felt the need for a legstretch (S2783), I only took three not very good images of a not very exciting Euphorbia.

Now on the R332, south out of Willowmore, a single lane cement road was as straight as a road could be. The sign along the road was a bit disheartening: Humansdorp 214 km. That’s a long way to go and we didn’t even know where Humansdorp was or if we wanted / needed to go there. We took a turning east for a legstretch and soon found the perfect if somewhat surprising excuse, Echinopsis oxygona in full flower (S2784). 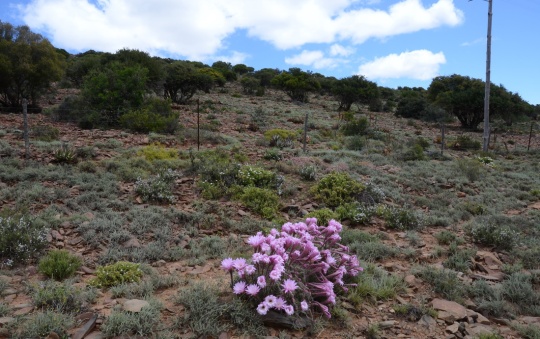 We had returned to the N9 driving towards Uniondale, passed roadsides covered in Mesemb shrubs in full flower, pink – purple and some white, this stop at some road works (S2785).

Still on the N9, Gasteria flowers were spotted, poking above the vegetation. We stopped (S2786) and although I took some pictures, the leaves were too hidden in the surrounding vegetation to show the plants off properly.

We now approached Uniondale and … drove straight past the Euphorbia horrida location! It can be quite tricky to stop on a main road with traffic on our tail, but at least we managed to spot a safe pull over point. As I have been economic with pictures of some of today’s other stops, here are two from this one. Brilliant photogenic plants.

Just as I thought that I could comfortably identify these plants, seen in many C&S shows in the UK, I read (Doreen Court – Succulent Flora of Southern Africa; 3rde Ed. 2010) that E. horrida became a synonym of E. polygona in 2006. I even became the proud owner of one old and large specimen during my 2012 speaking tour. As is often the case, plants are offered to branch members or auctioned when a member dies, but large plants are difficult to find a good home for as space in any collection is often at a premium. Apparently the main difference between these two taxa is found in their cyathia. E. horrida bears green cyathia that sometimes may turn brownish with the age while the cyathia of E. polygona are red to deep purple. I nowhave to wait for my plant to flower to confirm which one I have!