After two relatively active days, Bart had suggested an easy day today – 10 a.m start and an leisurely drive, with Bart & Brendan driving, up to Cerro Perales (S29. The track for the first part of the journey trip had been greatly improved – even the man at ‘Three Palm Farm’ had tidied his yard and put his pig in a sty!

Farther along the track had some rough patches but no worse than on previous occasions. Once at the top, I enjoyed the view (unlike 2001, it was a clear day) and the plants (Ritter’s C. tenabrosa) as usual (S2931). 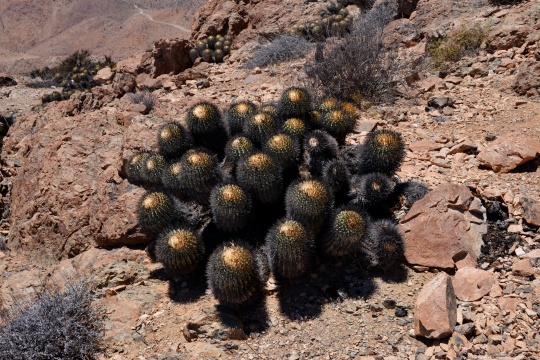 Sad to see that the fog nets were reduced to a pile of rubble, but I guess that it had only been an experimental site and the experiment seemed to have been finished some time ago. Bart mentioned that he had data that suggested that there is a population of C. krainziana just 500 m from the top of Perales! Wow!!

But looking at maps & GPS it seemed to me ‘500 m as the crow flies’, which would mean 3 km down & up steep hills. I had been expecting an easy day – no walking boots, no water, no oatmeal cookies! I ruled myself out of the exploration. As did Marijke & Lucy. JYC & Brendan went along. I watched them gingerly follow ‘Guanaco Bart’ gallop down and back and away. The other two could just not keep up and we saw Bart disappear just one last time. It was an hour later that I heard his excited cry in Dutch: ‘I’ve got them!!!’ but the sound echoed around the hills so I had no idea where it might have come from.

It was then another 2:30 hrs before he appeared back at the antennas – very excited! He was able to point at the exact spot down the hill and suggest an exact route that would take mere mortals like me c 1 hr to reach the plants – better than the conventional way in! AND the population here are the ‘REAL’ kranziana : snow white – fluffy spines! BUT the way back is a hard steep climb with stretches on hands & feet, that took him 2:30 hrs – probably 3 for me. Brendan & JYC hung around at the spot where they had last seen Bart and loyally stood in the hot sun waiting for his return. Having taken all the images I needed from Mt Perales & more, I headed back to the car where Lucy poured me two big cups of Cola Light! Thanks Lucy!!

With the help of some 300 mm zoom-lens images, it is just about possible to imagine krainziana at the place pointed out by Bart. Certainly an expedition worth trying on a future occasion with better preparation. This is likely to be the same location that Rudolf & Leo got to, climbing up from the parcelas – kind of allotments, but this route seems a lot more straight forward. Perhaps walk in from the top of the hill and out through the parcels with some volunteers driving the cars down?

With time to spare I joined Brendan’s car for a stop at the bottom of the hill, where Brendan found the crested cinerea from which Rudolf had offered seed for sale with his 1996 book.(S2932) 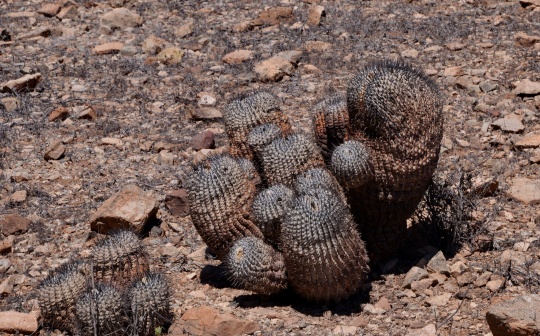 I wonder what came up from those seeds. Any crests? What %age?

We next took a look at the classic C. cinerea location at Breas, (S2933) including the spot where many of the plants had cristate heads. Brendan may well have some seed for sale when he is back in the UK.

The Tres Amigos – Brendan, Jonathan and Paul with Copiapoa cinerea

We enjoyed a last night at Club Taltal and today are off slowly to the south.