Again, the track bounced through the dry forest with plenty of Baobabs alongside between the shrubbery or standing on burning or still smouldering fields. Plenty of signs of ground clearing but little evidence of re-using the land for agriculture.

Our itinerary says of Salary: ‘an authentic Malagasy hotel, perched at the top of a dune with a magnificent beach at its feet. Possibility of making an exploration in the forest of mikéas.’  My memories of the day are limited to arriving mid afternoon at the village. Images taken reveal another drive through the dry spiny forest with baobabs along the side of the track. The internet helps with ‘Salary is a true gem with probably the nicest totally wild beach of the whole country. It takes about 4 hours to get here from Tulear on a 4×4‘. We were now just over half way our 28 day tour and I was happy to treat it as a place to relax, i.e. have a nap in the single huts and a trip to the shared outside toilet and shower facilities. Angie usually takes care of bringing or packing torches, but this time these were missing, so I had got used to using my laptop screen as a torch as I ventured out for my midnight bladder call. Here, it really was pitch dark, with a cloud cover keeping out any light from stars and the moon. I had walked the route to the toilet during daylight but had forgotten to remember the high second step onto the soft sand near where the car was parked. The resulting tumble gave me plenty of opportunity to search the sky for moon and stars, until I had managed to find and switch on my laptop again. Note to self: MUST pack a torch and batteries for Mexico!

The small settlement was authentic Malagasy witch chicken, ducks and a turkey, apparently unaware that Christmas was approaching were running around between the young children of the village, not bothered by cats and dogs lazing in the heat. John went for a swim but found the sea warmer than his bath water back in England and observed that any cooling effect had been undone by the time that he had reached the top of the chalet  at the top of the sand dune again. Had we been the typical sea, sun & sand holiday makers, the place would have been ideal. As it was, the rest day was very much appreciated and Christophe and I had a go at putting names to some of the more obscure (for me) plants that I had photographed. I decided to use the caption facility in the metadata displayed on my ACDSEE image browser / editor but was disappointed to find later, after I had backed up the image files to the plug in hard drive that I had brought along that much of the data entered had not been saved or had got lost in transferring the files. Unlike my MS database where the data entered is automatically saved as the cursor is moved to the next field, this is not the case for the ACDSEE metadata input screen where the data entered for each field has to be saved by pressing the return key. Lesson learned!

Despite the somewhat primitive accommodation, they had laid on a great dinner, of grilled fish, sautéed potatoes and a variety of vegetables, washed down with bottles of THB (Three Horse Brewery) pilsner beer 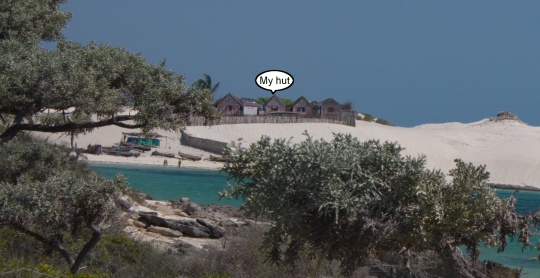