It’s only 108 km if you take the shortest road between the two towns. But if you want to see Fat Trees, it’s recommended to take a detour over the Grotebergpas, increasing today’s drive to 271 km.

We had a nice relaxed breakfast and took some pictures around our accommodation at the iGowati Country Hotel, Khorixas, the sort of place that when you see it on the internet, you find that it’s outside our budget, but when we arrived late yesterday afternoon, they were prepared to let us have beds at a fixed price per person, irrespective of the number of rooms we wanted – so we had one chalet each! and within budget, including breakfast!

We did not have to go back as far as last night’s poor light stop for more Welwitschia images, as these plants were now quite plentiful.  I had already read about the beetles that live in apparent symbiosis with the plant and after some stirring of the papery seed covers had soon stirred up some beetle activity:

Aloe flowers poking their heads out above the grasses had proven to be relatively easy to spot from a moving car, but here the large number that suddenly appeared seems unusual. It was next to a small village and I wonder if long ago these plants had been planted here and been cultivated for their medical properties.

There are gaps in the stop numbers for these pictures, but that’s only because we had already seen better examples of the plants pictured elsewhere. There were a number of reports of ‘fat trees’ around the Grotebergpas’ (Large Mountain Pass) and we certainly saw a fair few – more guesses about their names. How did I do? 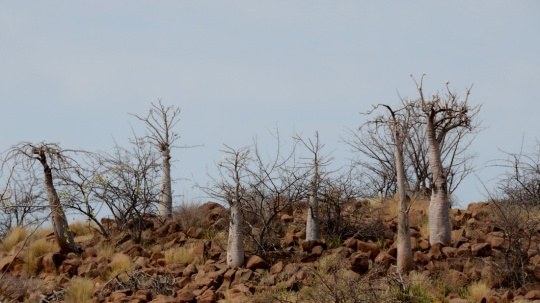 In addition to Fat Trees, the area is also known for some Fat Animals; Alain & Greet photographed elephants here in the area in 2010. We saw plenty of evidence of their regular visits. It seems that they use the road as their toilet! No luck in seeing the originators.

We did have one more nice surprise though as we spotted these from the car, again in fast fading light – very pleased with the camera’s light sensitivity!