Encouraged by yesterday’s excellent guided tour into the Richtersveld, we decided to take another look by ourselves, this time a little farther east and south, and to take a look at what grows between Port Nolloth and Lekkersing. The small settlement of Lekkersing was established in 1926 and lies 60km east of Port Nolloth. It is said that its name (which means to sing joyfully or beautifully) originated from the fact that a small fountain in the area ‘sang’ so beautifully that an early resident promptly named the village. Incidentally the residents of Lekkersing claim to be very good singers!

David recommended a visit to a hillside that he had visited on previous visits, at Augrabies Farm. This is a good time to take a look at the issue of climbing over fences to take a look at and photograph plants on land that belongs to a farmer or a company; it’s what we tend to do just about anywhere in the world in our pursuit of our hobby, our love for succulent plants. Each country has its own, mostly unwritten rules and etiquettes on the subject. It is said that trespassers in Texas are shot at before being asked to leave – but we have never experienced that. Fences are the common way to mark land ownership. They can help to keep cattle and other farm animals in, from straying onto neighbouring property or onto roads or they can aim to keep animals, including people out. The latter is usually emphasised by signs warning that trespassers will be prosecuted. Think of your own property, no matter how large or small – would you mind if four strangers asked if they could take pictures of plants that grew there? Chances are that you would invite them in and curiously watch as they go about their work – no harm done. And this again is what we have found all over the world. But often these farms are enormous and it is not clear where we should ask for permission. Trying to sort out such matters can be time-consuming and language barriers can make them difficult. In Brazil we saw workmen mending a fence and asked if we could pass through to see Parodia magnifica that grew some kilometers farther. We were taken to the house of the owners and the lady of the house escorted us to the best spot to see the plants and told stories of how they used to have picnics here, many years ago. But often it’s not clear how to contact the owners. In Chihuahua, Mexico, there are farms with a total area of Belgium or Holland. In Namibia we stayed in a B&B in Grunau where the owner told us that her property stretched over an area roughly equal to the country of Luxembourg. So often we assume that the fence is merely there to mark a boundary and to keep animals in.

In this case, David knew where to find the owner of Augrabies Farm and went to explain our wish to visit the land and ask permission that was readily granted. And so we could be relaxed about crossing the fence here and enjoy the plants that grew on the hill-side. Although there was not a cloud in the sky, with flat lands all the way to the coast, it was easy to see how any regular cloud cover and fog would drift in and be of benefit to the plants growing here. It was a delightful spot where we spent some 90 minutes during which I took 212 pictures! Looking through the images I recorded plant from 18 taxa and suspect that there were at least three times more of that number that I did not see or recognise as different. The most time-consuming aspect of preparing these diaries and the talks that I will be giving during 2013 is to select my favourite images. It is also one of the most enjoyable aspects but a particularly difficult task for this stop:

I know that in my favourite plant group, the Cactaceae, hobbyists can feel uneasy when a genus consists of a mixture of huge and tiny plants. How can a huge clump of Copiapoa solaris be the same genus as the tiny match stick head size C. laui? Well, that’s the intriguing thing about nature and while I was introduced to the 1.50 m (5 ft) tall T. paniculatus with big fat stems, early on in the trip, I have learned that there are quite a number of charming miniatures in the genus too. I hope that some one can confirm this and tell me which one. [PS I posted this image on iSpot and even as I’m writing this posting, the correct identification of Adromischus filicaulis subsp. filicaulis came through.]

Other plants at this stop include two species of Conophytum, Geranium sp, Pelargonium sp, Sarcocaulon sp, several species of Crassula, small and large and Mesemb shrubs, plus a Gasteria and a Haworthia, so an excellent stop.

Just 7 km up the road, we stopped again for a hillside full of clumps of Cheiridopsis:

I’ll include this image of an Adromischus sp(?)  at S2678 as a thank you to Derek Tribble who has been helping me with IDs by email and on iSpot – thank you Derek! 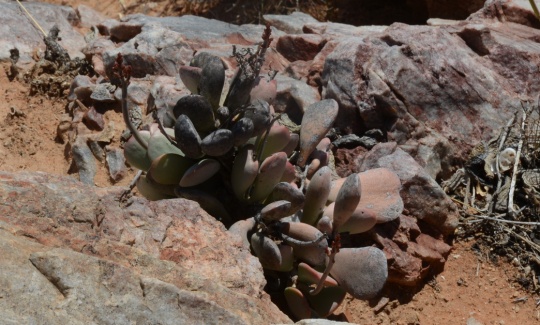 S2679 was prompted by some yet to be identified Asclepiads sp. but the picture I’ve selected is of a Crassula sp in bud. It’s not C. columnaris nor C. deceptor, but something in between. More checking images and books, but a nice plant irrespective of its name.

We drove on to Lekkersing and had a brief look around, but were unable to find anyone singing and returned home, having proven that some parts of the Richtersveld can be reached with a 2 wheel drive car.

We’ll have another go tomorrow, with Eksteenfontein as our goal.