Wednesday, 24 October 2012 – around Vredendal; the Knersvlakte

Much has been written about the diversity in succulent plants that grows in the Knersvlakte. No wonder that I managed 384 images on seven stops today after yesterday’s relative drought. The weather was a lot better than during our September stay, but we had come to learn that this can change as often as it does in the UK. The challenge now is to select just a few images to give you a flavour of what we saw and to try to put names the this rich diversity. Diverse they may be – yet they also have lots of features in common, so could be quite a challenge. I’m torn between including just images of plants where I’m fairly sure of the ID, or to just pick the nicest images and ask for your help to put names to the plants. I think I’ll go for the latter.

The selection and the ID at the first stop of the day, a random track turning east of the N7 (S2716) was relatively straight forward: 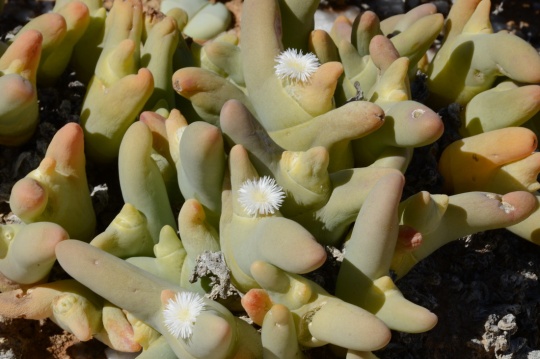 Or was it? When I went to look up the spelling of the Latin name, Dactylopsis digitata, in Mesembs of the World (1998) I found that it had been moved to the genus Phyllobolus, while Dorren Court in Succulent Flora of Southern Africa (3rd Ed. 2010) has it as Mesembryanthemum digitatum subsp digitatum. I wonder what the Latin is for ‘taxon-on-the-move’ as we could set up a genus for both Cactus and other Succulent plant species that share this feature where it seems that no-one knows where to put a plant taxonomically and so it is moved from pillar to post, like a pawn on a gamesboard.

Further more, it transpires that there are two subspecies: digitatum and littlewoodii, where littlewoodii is said to be much smaller. Great when you have them side by side on the bench in a nursery, to decide which is smaller than the other, but in the field….? We solved the problem a few days later when we found Finger-and-Thumb again, but much larger than our plants here, so this must be subsp. littlewoodii! Phew! And that was an easy one!!

As for the other plants, there were at least one each of Argyroderma, Cheiridopsis, ‘unidentified Mesemb sp.’ and ‘Unidentified Family-Genus-Species’ that I’ll try on iSpot in weeks to come.

We headed north, now back on N7 again, and turned west at the sign for Grootgraafwater, stopping near the turn off (S2717) as the N7 does not provide opportunities to stop, park the car and take a hike in the desert (semi desert to be precise). Again, nice plants! Conophytum calculus subsp. calculus looked very nice and still in growth, although the flower remains told us that we had missed seeing it at its best. We must have missed subsp. vanzylii which grows near Pofadder. There were two more Conophytum sp. here, but either going into rest or just coming out of it. In the end I have included two images from here: 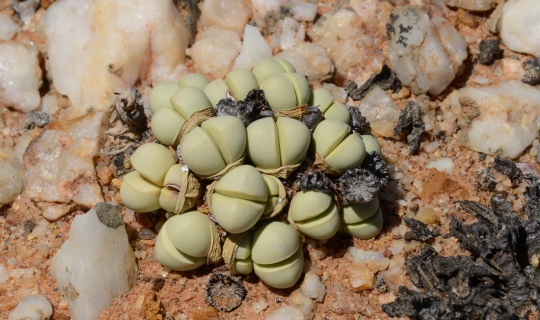 I have posted images of all Argyroderma sp.seen today at various stops on iSpot in the hope of getting some expert advice on how to tell them apart at this stage of growth. Look at:
http://www.ispot.org.za/search/node/argyroderma

so you can check in days to come on what the opinions are. Did we see one or many species?

I thought this image was interesting as it shows some beautiful lichen, usually an indication that at times it can be quite wet here. I thought the Mesemb flower further enhances the image, but have no idea of its ID – see what I’ve done there, David?

There were still a good number of flowers to see:

This image shows why the place is called the Knersvlakte. Just imagine the first settlers riding over the quartz gravel and the noise it made under their wheels – knersen in Dutch. I wonder how many rare succulents they crushed! 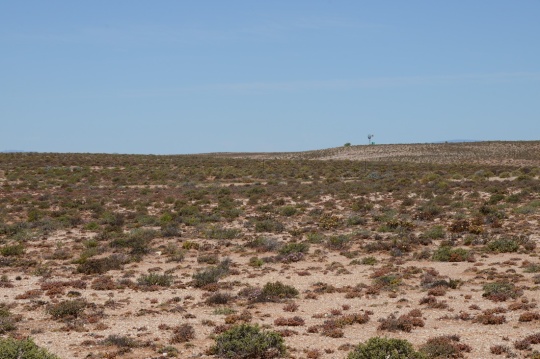 As you can see from the blue skies, the weather had greatly improved after September’s cold days here. Again we were glad to get back into the car – this time to escape the 30C plus heat. 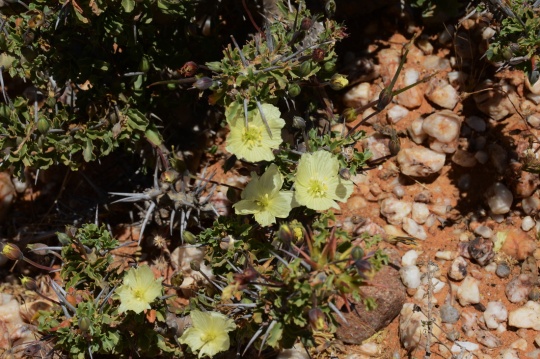 Back on the N7, we turned west again, near Nuwerus. We had information that Tylecodon nolteei grew here S2721). It would have been nice to know what the plant looked like as well as location data. Now, back home, I know that we should have been looking for another miniature – another needle in a haystack! We did not find it.

We decided to head back to the hotel on the R363, a good hard top road from Nuwerus to Luderitzville.  We made one more stop, S2722 because eagle-eyed Eunice had spotted red Aloe flowers in the field to the left of the road. Good spot! And what a surprise when the Aloe in question turned out to be Aloe melanacantha.

We had thought that this plant grew high on hill tops in the Richtersveld, with its close relative A. erinacea, so finding Aloe melanacantha here was a nice surprise that later that evening we celebrated with another nice steak (what else) at Paiter’s Restaurant – simply the best in town.