Refreshed from their break yesterday Cliff and David were back on board for another day in the Knersvlakte. Two days ago, we had seen signs for another Kokerboom nursery and had passed the Knersvlakte Spens nursery. People in England had told us to go to a nursery, some 30 km out of Vanrhynsdorp on the N7 to get a key to a track with choice succulents. Was this the one?

S2729 was an opportunity to find out as we pulled in to ask. The lady who helped us did not speak English but with her Afrikaans and my Dutch we managed to understand that the owner had gone into town and might be back later. We decided to take a look around and found many of the local plants growing in tins and plastic bags, without much sign of propagation and nursery activities. Was this a case of people digging up local plants as and when there were gaps on the sales bench? They seemed to have as much trouble as I had with plant IDs, as there were no labels to suggest names. The list of species reported by one European traveller at one stop near here on his plant list suggests that he had been around the Spens Knersvlakte nursery and had given names to everything that he had seen, using alternative names where he was not sure of the exact ID! Other people’s data can be full of surprises!

We went back to our tried and tested formula of looking for plants with some random stops on random tracks from random turns on the N7, with our eyes open for quartz patches. The first of these was along a track signposted to Beeswater and Rooiberg (I guess ‘Redhill’ in English, but quite different from the Redhill in Surrey where I used to work in the 90s.)

Eunice spotted a Euphorbia from the car and called the stop (S2730). The expected Argyroderma sp. was here but the attention was on the Euphorb,  many short cylindrical stems forming small clumps, red fruits. E. pentops is reported from here, but without flowers (the name means ‘five eyes’) it’s difficult to say.

We had to make a U-turn as the track came to an abrupt end at a locked gate, but it was not long before we had found another track, heading south, with a quartz patch and a low quartz hill (S2731). Yes, more Argies, but what was this? It was obviously a plant at rest, and is that a Mesemb type fruit capsule that I can see between the papery tissues at the top of the leaves? But what is it? 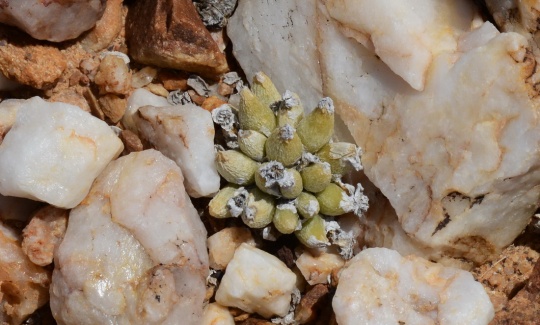 Lower down the hill we ran into more Finger-and-Thumb plants, but these seemed larger than the ones we had seen earlier so I guess that this is Mesembryanthemum (Dactylopsis) digitatum ssp digitatum. It was very hot – mid thirties C – so it was heat rather than boredom that got us back in the car.  Less than 2 km along, we got out again as Aloe variegata was spotted along the track. In Europe, certainly in the Netherlands and in the UK, this plant is often seen in windowsills of houses where none of the other plants on display suggest an interest in succulent plants. It has a number of common names, including Tiger Aloe and Partridge Breast, due to its leaf markings and, in Afrikaans, kanniedood, literally ‘can not die’ referring to the harsh conditions it endures in habitat. Despite the fact that it is said to be common in habitat, we had not yet seen it and it seemed to try to disprove its Afrikaner name as it looked pretty beaten up.