From Saturday lunch time until Monday morning, many South African villages are empty and silent, with the exception of the appealing sound of churchbells ringing. Here there were also trucks passing through at regular intervals – I have no idea where they came from or where they went.

We set off, not quite sure where we might spend the night; we had a number of options, depending on the quality of roads / tracks and the time we’d spend out of the car taking pictures. We headed south on the R355 and made a stop to look for a plant that David believed he had seen here before (S2735). There wasn’t anything new or spectacular (well, you get very spoilt after the sights of the past weeks!) and David grew more anxious and decided to walk ahead, inspecting road cuttings as he went. Plenty of Crassula deltoidea, Tylecodon paniculatus and T. wallachi, here with fresh flower spikes and buds – summer was really on its way! As we caught up with David, he had a big grin on his face and pointed triumphantly at the road cutting. There it was: 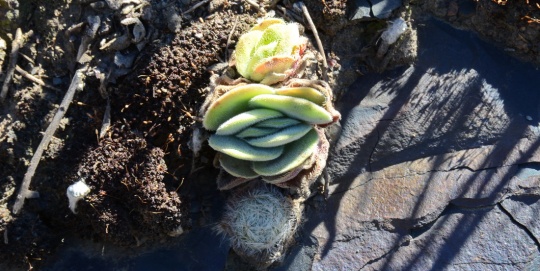 I had seen pictures of these hairy Crassula before, but rarely seen them offered for sale. David tells me that C. barbata is the choice one, flowers when still quite young, and then dies – it’s monocarpic. It seems that nurserymen don’t want to run the risk of plants dying before they reach the sales bench and that the public is not keen to reinvest in a plant that they’ve probably already killed before. Still, nice photogenic plant, if you can find a clean one that is either growing completely in the shade or in the full sun – the contrast can be quite an issue for plants growing half in the sun and half in the shade. It quite likes to grow in the shade of shrubs and then picks up dead leaves as they fall off the shrub.

We drove on, pleased to have such an early success finding one of today’s target plants already and stopped again for some nice large Aloes by the side of the road (S2736). 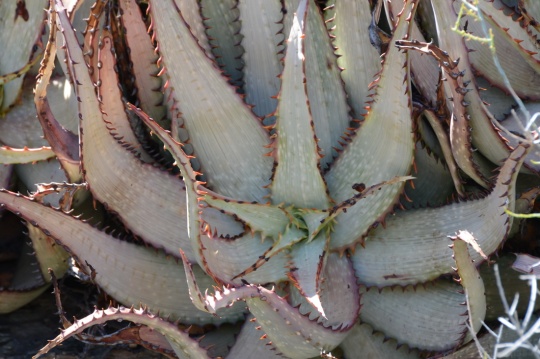 [while writing this posting, the Aloe has been identified as A. microstigma on iSpot]

Soon after setting off again, Cliff felt the steering on the car pull to the right. A quick look confirmed puncture #3 of the trip, a couple of 100 kms from the nearest town, on a Sunday. We decided to stick to the R355, with regular (c12 cars per hour) passing traffic and head for the nearest tarmac and on to the nearest large town with a Budget Rent A Car office (Worcester). Planning in advance is great but must allow elasticity for unforeseen circumstances.

In addition we agreed to be a bit more economic with our stops, in case of further incidents. So S2737 was another quick Aloe stop and by S2738 we reached the Tankwa Karoo National Park. Here, and at S2739, both along the R355, it was flat, hot, featureless with just very low Mesemb (?) shrubs. I’m told that there are some interesting plants here, but sadly we did not see them. Perhaps we were just a bit too anxious about driving on a temporary max 80 km p hr tyre on a gravel track.