I felt that by crossing back into South Africa a phase of our trip had been completed. Time for some reflection. I have never before been on a plant focussed trip where I did not have names for so many of the plants photographed. As I’m now, after the event, learning about the plants we saw, it strikes me that we must have passed by so many that now, on paper, look quite interesting but that so far I have not been able to spot in my pictures and had never heard of before the trip. I guess that I’m unusual in the Cactus & Succulent hobby in that most people will have grown a group of plants for years in their greenhouses and on their windowsills before finally seeing their friends in nature – one of the ultimate rewards in the hobby. I’m a cactus freak and you’ll find very few of the other succulents in my collection, although there has been a small influx of Haworthia, Crassulas and Mesembs this year since plans for this trip were being hatched. Should I have done more preparation?

As I sit at home, a few days before Christmas with the rain bouncing off the windows and more reports of local flooding on the news, I think not. This is the ideal time to look through my images, relive the experiences and search through literature and the internet for IDs. Anyway, where would you start? In a way, I felt like one of the early explorers, just about everything I saw plant wise was new and unknown to me. Like the early plant explorers, often people with a variable background and knowledge in botany driven by a natural curiosity and interest in their environment, I have a need to put names to what I saw – I have already been booked for some 30 talks of What I Saw Last Winter to UK branches of the British Cactus & Succulent Society for 2013 and there is an expectation that the plants that you show have a name and that the presenter knows them. Fortunately I believe that I have sufficient nice pictures of plants for which I have names and iSpot provides invaluable help in suggesting names for plants in images that would further improve a presentation. And fortunately I travelled with people who knew more than I did and offered names, if only my memory could hold on to them.

Back to Africa and today’s outing, south of Port Nolloth. Over the next five days we would use Port Nolloth as a base to make day trips into northern Namaqualand and the Richtersveld. I see that I took 1,588 images during that time; the comparative photographic draught of plant images in Namibia was over!

Our first stop of the day was at McDougall Bay, a few km south of Port Nolloth, where David had promised to show us a plant that at least I was familiar with – ‘Baby Toes’!

There were some anxious minutes before we found the first plant. Were they still here? It had been seven years since David had last been here! We need not have worried. The center of the picture shows plant exposed after blowing away a layer of sand. Bottom left you can see some windows of plants covered in sand that illustrates the way we found the plant originally. Tip: carry a soft paint brush to clean up plants like this or make sure that the wind is blowing away from you as you get down on hands and knees to blow away the surface layer, unlike I did.

Fifteen minutes after posting this image on iSpot, Alan Horstmann added this comment: ‘Subsp aurantiaca prefers the littoral sands of the south and subsp rhopalophylla prefers the calciferous sands of the northern part of the distribution’. What a great site, thank you Alan!

We followed a track south, running some 10 km away from the coast towards Kleinsee. S2658 was prompted by Cliff rescuing a tortoise that was crossing the road. To be honest, it would have been fine if we had just driven around it, we saw less than one car per hour and tortoises can move remarkably fast once they’ve made up their mind where they are going. Cliff learned the hard way that tortoises empty their bladder as a form of defence when they are picked up. We used the opportunity to photograph the numerous ‘Cheiridopsis‘ (my broad concept) and ‘Mesemb shrub – purple flowers’. 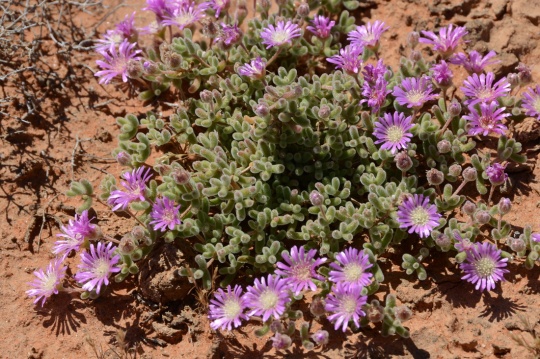 A bit farther along the track, at S2659, we stopped again for nice clumps of another clumping Mesemb, provisionally identified as an Argyroderma sp., but with leaves that seem too angular for this genus.  Any ideas? [Identified on iSpot as Cheiridopsis glomerata, Thanks Derek!] 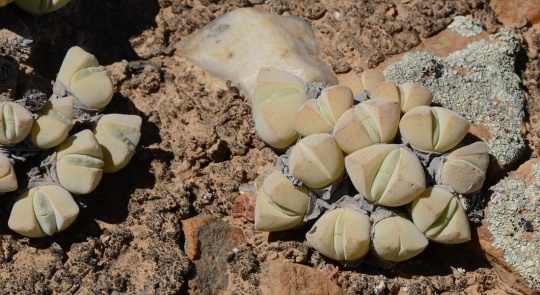 S2660 was just a quick stop to take a picture of a traffic sign – a red-edged warning triangle with a drawing of a tortoise! To celebrate this, my 101st stop since Kirstenbosch on 21 September, I also photographed this Mesemb shrub.

We reached Kleinsee and this diamond mining town, owned by De Beers, seemed to be the end of the road, with a guarded gate blocking the way. We explained that we had hoped to drive inland to Komaggas so had to register our passports to get a permit to drive on – quite easy really.

After racing some ostriches along the fence alongside the road, David spotted the bright red flowers of Aloes above the low shrubs (S2661). Not sure how often, if ever, security checks these tracks (we had not seen any cars) we decided to pop over the fence for some quick pictures, more weary of any ostriches than security!

Near Komaggas we found a nice hillside, no barbed wire and on this sunny and warm afternoon we spread out over the hill and enjoyed ourselves taking pictures – I left here with 146 images taken during 104 minutes; that’s just over 1.4 images per minute! Not bad with images like this one:

We found time for one more quick stop (2663), as the sun was going down quickly, throwing long shadows. It took a bit longer than planned after David discovered the plant of the day:

The tracks that we had been on all day were of a good quality, but now things started to deteriorate. Fading daylight did not help much either. We slid around on the soft sand, trying to keep going to avoid getting stuck in the sand. Fortunately Cliff again got us back safely to the hotel, well done Cliff!