Our luck had changed for the better last night as we approached the city of Patzcuaro in the dark at about 8 p.m. after a long day. I announced that I had enough and so mobile phones and SatNavs started searching for nearby hotels. Just at that time the trusted sign of a Best Western Hotel appeared on our side of the road. This will do! And so we woke up this morning in the Best Western Posada de Don Vasco, Patzcuaro. Lovely authentic feel to a very comfortable hotel with excellent food. I managed to take some pictures of the building and the excellently maintained gardens (S3546). The Poinsettias still had their red bracts on display and were about 2 m (6 ft 7″) tall. In the UK they appear everywhere in mid-December as Christmas presents when visit friends and relations over the festive seasons and have usually been killed by overwatering by the time that we take our Christmas decorations down by the 12th day of Christmas.

Our primary target plant today was Ferocactus lindsayi.   Other than the island endemic taxa in Baja California, Ferocactus lindsayi must be the most illusive Ferocactus in cultivation.  Why? It grows quite some distance from the Mexican cactus hot spots and judging from my computer searches in England, there are not many cactus locations reported from Michoacan State. So not too many cactophiles spend their limited holiday time allowance in this comparatively remote area. As a result, few plants and seeds have made it to Europe where it is said to be ‘tricky’ in cultivation.
Today we set off to see F. lindsayi at three different locations, reported by Nigel Taylor and Paul Hoxey some 15 years ago. We also had locations reported by Wolter ten Hoeve, one of which had been visited a week or so ago by Ian & Cliff. The secondary target plant was Pachycereus (Backebergia) militaris.  This was a very popular plant in the 1970s with many top-cuts being imported into Europe for their impressive cephalia.  As we headed south on MEX37D, we tried to get off past Nueva Italia on the old (Libre) road but must have missed the turning. SatNav must have been set to ‘fastest / shortest route and pointed us onto the toll road. Yes, very fast and smooth, but without opportunities to stop once we started to see P. militaris either side of the road.
We had the GPS coordinates for Ian & Cliff’s stop and this took us off the MEX37D, first onto the Libre and then on a side road that ended in a dead end after we had passed and marked Ian’s spot. To get off the 37D, we hade to pay the toll for the previous stretchand I notived that the toll booth was at the hamlet of Las Cañas. Ralph Martin’s field number list shows ‘WTH 786 – Wolter ten Hoeve: On a steep rocky hill, South of Las Cañas on MICH-10, Michoacán, Mexico in 2009′. As we drove to Ian’s coordinates, I became sure that this was the same spot.
We parked up and pointed our cameras to the exposed hillside and with my 300mm lens could clearly see a dozen or so plants, high on quite a steep hill, with excellent tight barbed wire at the foot of the hill. We walked along the track to look for easier access and were fortunate to spot one plant, with fruits, roughly at eye-level. Here we queued up and in turn took 3-4 pictures from different angles. One of the fruits was examined and the seed was found to look ripe. We then went to explore on the other side of the fence. I made my way back to the car to the spot described in some detail by Ian and arrived, just as Chris came down to it from the other side. 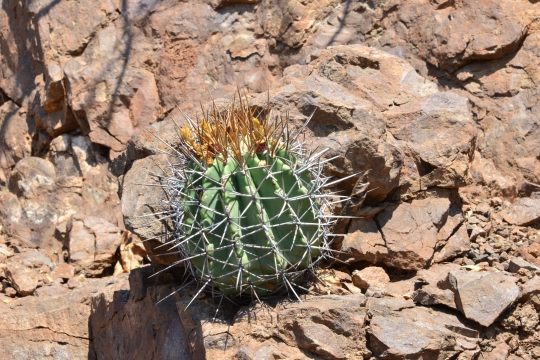 We successfully negotiated the barbed wire and found some more plants, some mature and in fruit but also a number of seedlings, I’d guess about five years of age. [PS: Probably much more like 15 years or more, having seen 12 year old plants since.]
Wolter and Ian both reported Mammillaria growing here as well. Wolter reports M. beneckei, as does Ian, with an additional two ‘different taxa’. In addition to the cacti mentioned, the hills were quite densely covered in ceroids, of which I recognised Pachycereus pecten-arboriginum that I saw in Baja California Sur and in Sinaloa on previous trips. But there were other ceroid taxa present that will need a bit more detective work for their name later.
We drove on, towards the Nigel Taylor site, now off the 37D with a difficult entrance when huge trucks come charging up from behind. There are now a small number of polytunnels where, I assume, the plants used to grow.  We carried on in the hope to get back on to the Libre, but gave up about 5 km before reaching the Pacific Ocean, made a U-turn and headed back to Nueva Italia to find the Hotel where Ian and Cliff had stayed.
Today we covered another 422 km, exactly the same amount as yesterday and in the heat of around 32 C, very tiring.